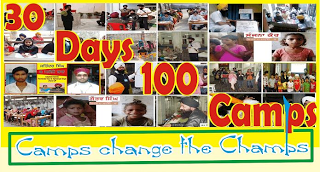 New Delhi, India: According to information shared by S. Jagminder Singh “100 Gurmat Camps are being organised in 30 days starting from 20th April to 20th May 2013 in Alwar District of Rajasthan, India. Several organizations are part of this grand initiative”.

It is learnt that 30 Days 100 Camps (www.30Days100Camps.com) is first of its kind initiative. Gurmat Camps would be organised in all the 30 Gurdwaras of Alwar City and in about 70Gurdwaras located in the villages in Alwar District. Locations for these 100 Gurmat Camps have been chosen so as to cover the entire 1,00,000(1 lac)+ Sangat of Alwar, including 20,000 children of 250+ Gurdwaras in Alwar District.

“The motive of the initiative 30 Days 100 Camps is to inspire the Sangat, especially the youth towards the true values of Sikhism. Through this initiative, they would be reaching out to the economically backward Sikligar, Mazhbi, Lubana and Rai Sikhs living in Alwar villages. This would be first-ever Gurmat Camp in more than 90 % of the Alwar villages. Also it would help to carry out a broad survey of all the villages simultaneously along with Gurmat Camps, thus the priority villages can be found out where there is an urgent need to provide school education as well as Gurmat education.

Another motive is to provide Gurmat& Sikh History Books including SRM, Learn Punjabi Books for each Sikh household as there is an acute shortage of Gurmat Books in Alwar.

Another major advantage is, that through this initiative, several organizations are coming together on a common platform and many have already evinced interest in launching long-term projects for helping out the 1 lac + disadvantaged Sikhs in Alwar through empowerment, education, employment & Gurmat. At least 4 Teams would be organising Gurmat Camps in 4 different villages simultaneously. Hence, in this way, 100 Gurmat Camps would be organised in a maximum of 30 days.

www.30Days100Camps.com is a website specifically developed for this initiative where the documentation of all the related work would be done, contributions by each organization and all the photos and videos of all the 100 Gurmat Camps would be showcased on this website. Keep tracking the progress of the initiative on this website.

Note: Since we do not know what material it will be used in camps, hence SikhWire does not officially endorse by posting this article.
We do however support such initiative if they are in aligned with Sri Akal Takht Sahib. Good Luck with camp organizers.