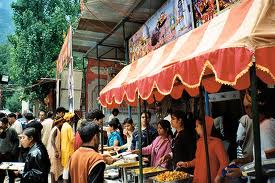 Fatehgarn Sahib, Punjab: Around 250 langars were set up near Fatehgarh Sahib to mark the Shaheedi Jor Mela which started on December 25 and concluded on December 27 with a religious procession.

Though the Jor Mela concluded on Friday but still large number of langars are being organized in Fatehgarh Sahib and surrounding areas.

During the mela,several langar organizers had put up barricades, where all passersby, irrespective of the mode of transport used by them, were requested to take food or snacks before continuing their journeys.

Braving the cold weather , their voluntary service continued round the clock. These volunteers were none other than villagers of Punjab for whom it was their “religious duty” to look after the “yatris” going to a religious mela. Their motive was to “serve all yatris” irrespective of their religion, creed, caste, colour or age.

Women and girls take the responsibility of cooking ‘chapatis’ and cleaning utensils while menfolk are assigned the job of requesting the passersby to stop and serving them hot food and snacks. Families took turns as the langar continues round the clock.

Another interesting aspect of such community kitchens is that people cutting across religion and caste lines join these and work as a team. They symbolise communal harmony, brotherhood and amity. The overwhelming participation in these langars gives a silent rebuff to those who want to divide people in the name of religion.