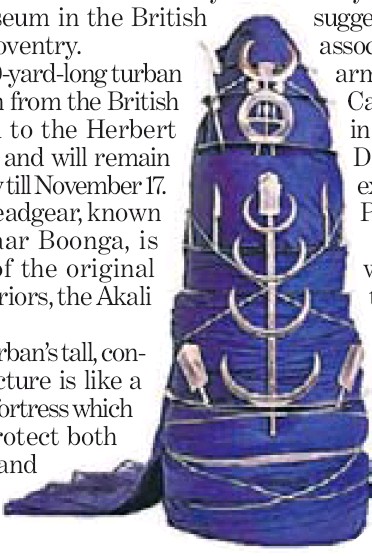 The headgear, known as Dastaar Boonga, is typical of the original Sikh warriors, the Akali nihangs.

The turban’s tall, conical structure is like a tower or fortress which would protect both the hair and the head in battle.

“The ornaments on this Sikh ‘fortress’ turban include a modified Rattray battalion badge, which suggests that it may have an association with the British army battalion raised by Captain Thomas Rattray in Lahore in 1856,” the Art Daily newspaper quoted exhibition officer Jessica Pinson as saying.

Its conical shape would allow warriors to store weapons such as daggers, swords and metal-throwing discs for easy access in battle. The exhibition gives the public a chance to learn about Sikh history and celebrate the city’s social diversity.