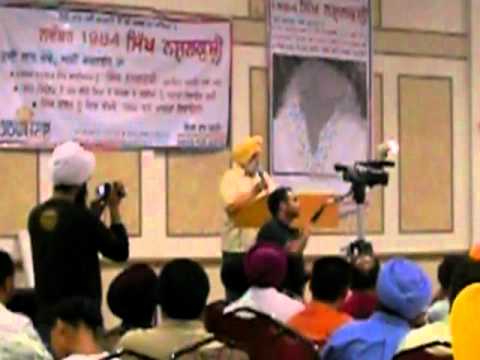 New Delhi,India: Victims of 1984 anti-Sikh riots on Tuesday alleged in a Delhi court that the CBI had conducted an “unfair probe” in a case against Congress leader Jagdish Tytler and sought further investigation to ascertain his role in the killing of three persons in the massacre.

The victims told Additional Sessions Judge (ASJ) Anuradha Shukla Bhardwaj that CBI should examine Bollywood star Amitabh Bachchan and a former Delhi Police officer as witnesses as they were also seen in a CD, placed on record by the agency, standing near the body of then Prime Minister Indira Gandhi at Teen Murti Bhavan where Tytler was also present.

The court was hearing final arguments on the protest petition filed by riot victim Lakhwinder Kaur, whose husband Badal Singh was killed in the riots, challenging the CBI’s closure report and clean chit to Tytler in the case.

“To justify the closure report, CBI has relied on the CD supplied by accused (Tytler) to prove his plea of alibi that he was at Teen Murti Bhavan near the body of late Prime Minister Indira Gandhi. The CD mentions neither time nor date.

“In the said CD, RK Dhawan (former personal secretary of Indira Gandhi), Gautam Kaul (the then additional commissioner of police) and Amitabh Bachchan are also seen near the place where Tytler is shown to be standing. As such these three persons are natural witnesses to prove genuineness and reliability of the undated and untimed CD, and adding that CBI chose not to examine these three persons.”

The court listed the matter for February 19. The CBI had given a clean chit to Tytler on April 2, 2009 claiming lack of evidence against him in the case pertaining to the murder of three persons on November 1, 1984, in wake of the assassination of Indira Gandhi.

Tytler’s alleged role in the case relating to killings of three persons in the riots, Badal Singh, Thakur Singh and Gurcharan Singh, near Gurudwara Pulbangash in North Delhi was re-investigated by CBI after a court had in December 2007 refused to accept its closure report.