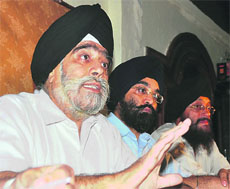 Ludhiana, Punjab:  The Ludhiana Sikh Migrants Welfare Board has charged the officials of the district administration and the Greater Ludhiana Area Development Authority (GLADA) with giving a raw deal to the genuine victims of 1984 Sikh Genocide  at the behest of certain self-styled leaders of genocide victims and ‘kabza-mafia’.

Addressing a press conference today, chairman of the board Kartar Singh Patna alleged that the draw of lots conducted by GLADA for the allotment of residential flats to genocide victims on June 17 was carried out on the directions of ‘ill-reputed’ operators of ‘kabza mafia’ who had usurped government property in the name of bogus genocide victims.

Terming the draw of lots a cruel joke, Patna maintained that the names of a large number of genuine applicants were not included in the draw while some others had managed to get multiple slips in their name, thus increasing their chances of getting the flats.

In support of his allegations of gross irregularities committed in conducting the draw, the leader of the Sikh migrants body quoted an instance of a female applicant having been bashed up by members of the ‘kabza mafia’ when she objected to the way applicants had been chosen for inclusion in the draw of lots.

He said 145 eligible applicants had filed a writ petition in the Punjab and Haryana High Court seeking allotment of MIG flats. “The HC issued a notice of motion on June 10, 2013d to GLADA which is to come up for hearing on July 3,2013. The names of the petitioners have not been taken into consideration in the draw of lots whereas these should have been taken up on priority,” Patna asserted while demanding that the draw ought to be cancelled and conducted again in a fair and a transparent manner.

GLADA officials, however, stoutly refuted the charges saying the two groups of riot victims, owing allegiance to different political parties, were trading charges in a bid to draw political mileage.

“The draw of lot for allotment of flats to genocide victims was conducted in a fair and a completely transparent manner,” a senior GLADA official claimed.