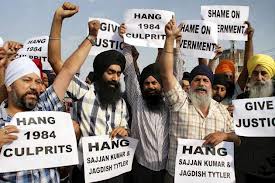 1984 genocide: Three get life term, two others 3 yrs in jail

The court of District and Sessions Judge JR Aryan further sentenced two others – Mahender Yadav and Krishan Khokhar – to three-year rigorous imprisonment for violence and genocide. They were later released on bail after filing a bond for Rs 25,000. The judge also imposed a fine of Rs 1,000 each on all five convicts.

The CBI counsel had sought death penalty for the three by citing examples wherein convicts under Section 302 of the Indian Penal Code had been sentenced to death by various courts.

But the defence counsel argued that it was not a rarest-of-rare case and that the convicts were being punished under Sections 302 and 149, IPC, wherein their direct involvement in the crime had not been proven.

After hearing the arguments, the court rejected the CBI plea and awarded life imprisonment to the three.

The judge had pronounced its judgment in the case on April 30. Senior Congress leader Sajjan Kumar was one of the suspects in the case but was acquitted by the court.

The case was registered at the Delhi Cantonment Board police station for the killing of five Sikhs – Kehar Singh, Gurpreet Singh, Raghuvender Singh, Narender Pal Singh and Kuldeep Singh – in the Raj Nagar area in 1984.

The victims were killed during the rioting that erupted after Prime Minister Indira Gandhi’s assassination on October 31, 1984.

Previous: SAD workers protest acquittal of Sajjan Kumar
Next: No education this: Faridkot primary school leaves much to be desired