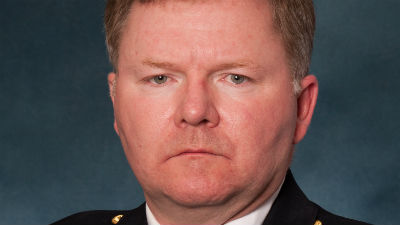 Wisconsin, US: A police officer shot at least eight times in the neck and extremities outside the Sikh temple in Oak Creek, Wis, waved off fellow officers attempting to rescue him and indicated they should assist others still inside.

Lt. Brian Murphy, 51, was shot Sunday and is now recovering in the hospital after a second surgery, Oak Creek Police Chief John Edwards said. The 21-year veteran of the police force is expected to survive.

“[Murphy] received eight or nine gunshot wounds, to extremities and also to the cheek area and the neck,” Edwards said. “He was in very close proximity to the shooter. When he arrived, he came upon someone who was injured, and he was going to assist that individual when the shooter came around him, close to his squad, and hit him at a close distance.”

The officer was wearing a bullet proof vest, Edwards said.

After gunman Wade Page was shot and killed by other officers, they moved to rescue Murphy. But when they located him, Murphy indicated that rather than help him they should enter the temple to assist any other victims.

“He had been shot nine times — one of them very serious in the neck area — and he waved them off and told them to go into the temple to assist those in there,” Edwards said.

Murphy was the first police officer to respond to the scene when 911 calls began pouring into the police department around 10:25 a.m. after the gunman, Army veteran Wade Michael Page, opened fire at the Sikh religious center just south of Milwaukee.

Murphy, who Edwards said was a member of Oak Creek police department’s tactical team for years, was the first officer to encounter Page when he arrived at the scene.

Officers arriving on the scene just after Murphy heard the exchange of gunfire, but were not aware that an officer had been shot, Edwards said. The officers soon observed Page walking through the parking lot and began to give him commands to drop his weapon and put his hands up.

Page responded with gunfire, spraying two police vehicles with bullets. At that point one of the officers on the scene shot and killed him.

“One of the officers returned fire with his squad rifle, putting the individual down,” Edwards said at a press conference today. “They then secured that individual, and at that point did an officer rescue.”

When Murphy didn’t answer his call, his colleagues realized he had been hurt and searched for him.

Murphy underwent surgery at Froedtert Hospital, the main trauma center in the Milwaukee region, along with two other injured victims. All three of the victims remain in critical condition as of Monday morning, according to a representative from Froedtert Hospital.

All were in critical condition with gunshot wounds – one to the chest and abdomen, one to the neck, and the third to his face and extremities, a hospital spokesman said.

The Sikh Human Rights Group has reportedly pledged $10,000 award to Murphy for the shooting at Sikh temple.