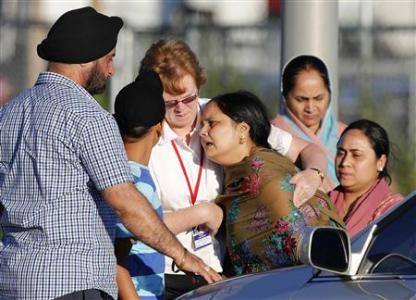 A distraught women is helped to a car outside of the Sikh temple in Oak Creek, Wisconsin

The Milwaukee County sheriff’s office on Wednesday, Aug. 16, released a recording of the 911 calls it received from people on Aug. 5 reporting that a gunman was shooting people at the Sikh Temple of Wisconsin in Oak Creek.

Wade Michael Page, a white supremacist, shot and killed six worshippers and then shot and killed himself after an Oak Creek police officer wounded him in the parking lot of the temple at 7512 S. Howell Ave.

Some of the calls came from people hiding in the temple, and it sounds as if gunshots can be heard on one of them. One caller whispers to a dispatcher, asking for help to be sent as quickly as possible.

Others are matter-of-fact calls informing authorities that a shooting has occurred.

“And he’s in the church with the gun?” the dispatcher asks as she starts to transfer the call to Oak Creek police.

The dispatcher gets Oak Creek on the line and says, “Milwaukee sheriff with a transfer. 7420 S. Howell. Said there’s a guy in the church shooting with a gun.”

“OK. Did anybody get hit?” the dispatcher asks.

“He’s shooting,” the man says, and the call cuts off.

On another call, a woman with an accent and who at times is difficult to understand tells a dispatcher that somebody is firing and there might be blood. “It’s a Sikh temple, you know,” the woman tells the dispatcher, who tells the caller that officers are on the way.

In another call, a woman who likely is in the temple hiding from the shooter speaks in a voice that is barely audible. The dispatcher tells the woman she is having trouble hearing her.

In a faint whisper, the woman gives an address and says, “Sikh Temple.”

The dispatcher says, “Is it regarding a shooting?”

“We’ve got help on the way, OK? OK, ma’am?” the dispatcher says, but doesn’t get a response.

Another woman tells a dispatcher, “I need help. Somebody’s shooting outside the temple.”

The dispatcher tells the woman that officers are on the scene and asks: “Is there something you can provide them?”

The woman says, “I don’t know. We are sitting in the basement.”

“Did you see the shooter?” the dispatcher asks.

“Police are on the scene,” the dispatcher says.

“Thank you,” the woman quietly responds.

Oak Creek police and fire departments have not yet released their recordings of 911 calls from that day. Depending on the cellphone carrier, 911 calls from cellphones go to either the Sheriff’s Department or the Milwaukee Police Department. They are then transferred to the agency where the emergency is occurring, said Fran McLaughlin, sheriff’s spokeswoman.

The 911 calls began at 10:25 a.m. that Sunday. A number of calls came from inside the temple from worshippers, who also called family members. Some of the worshippers were hiding in a bathroom; others hid in a pantry.

“Ma’am, there is shooting at 7512 S. Howell Ave… . Many shooting. Many gunfires,” a male caller tells the dispatcher.

One of the calls came from Jim Haase, who lives on East Manitoba Avenue, near the temple.

He reports the shooting and says, “I need an ambulance. … A guy came to my house. He’s laying in my front yard bleeding.”

Haase, a retired firefighter, tended to the victim until the ambulance arrived.

Page ambushed his victims while they were arriving or preparing for a prayer service and communal meal.

Four others also were also shot and wounded by Page. Oak Creek Police Lt. Brian Murphy was listed in satisfactory condition at Froedtert Hospital on Wednesday. Punjab Singh is in critical condition at the hospital. Santokh Singh has been released.

Amarjit Kaur, a woman grazed by a bullet, was treated on the day of the shooting at a hospital and released.