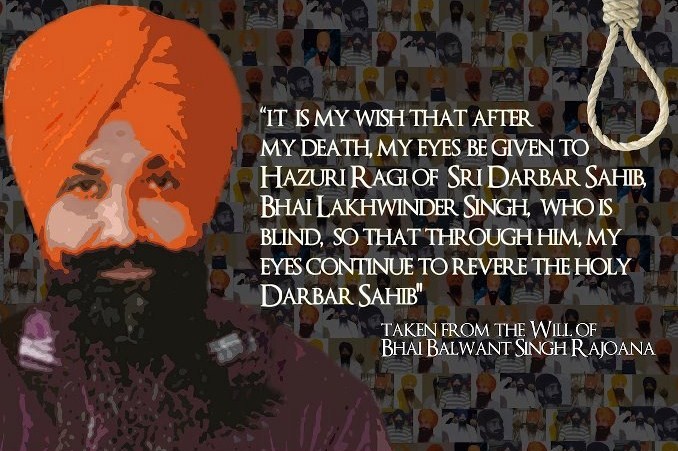 Why Balwant Singh Rajoana never appealed against his death sentence

Amritsar, Punjab: Balwant Singh Rajoana was to be executed on March 31. This would have been the first execution in India since 2004. His execution has been stayed – for the time being – in response to the rising whirlpool of politics that’s engulfed Punjab on this issue. That India should sully its record again after 8 years with state sanctioned murder is a matter of distress, but this consideration seems largely removed from the politics of Rajoana’s execution. However even in addition to principled opposition to the death penalty, the cynical considerations swirling around his execution, the specifics of the case itself are significant.

Opposition to capital punishment is removed from the specifics of the case, basing the argument on human rights, the range and extent of power given to the State, citizen’s right to equality before law, the inherent arbitrariness in the exercise of power by individual state functionaries, and irrevocability of the punishment especially given the possibility of wrongful conviction. In contrast, the proponents of capital punishment argue on the specifics, seeking justification in the heinousness of the crime, recidivism, retribution, and deterrence. In this the proponents are almost vigilante in their perspective, with their preoccupation with punishment for the alleged lawbreaker than the state, its powers and processes, and civil liberties

Nevertheless in this instance, the specifics too raise some disturbing questions. Balwant Singh is on death row for his role in the suicide bombing of the former Chief Minister of Punjab, Beant Singh in 1995. 17 persons, including the Chief Minister were killed. The history has some relevance. Punjab had been racked by insurgency since the seventies, with the regional autonomy movement progressively hardening into a secessionist movement over the decades. President’s Rule was established in 1987 in the aftermath of Operation Bluestar and the Sikh pogrom in Delhi in 1984. After five years of President Rule checkered by militancy and heavy police crackdown, elections were called in 1992, but were postponed twice. Protesting that the elections were unlikely to be “free and fair”, the Sikh parties boycotted the elections. With voter turnout in the low twenties, Beant Singh’s ascendancy was widely disparaged by the Sikhs as lacking legitimacy. Militancy and consequent police clampdown continued unabated. Beant Singh was assassinated in 1995 by suicide bomber Dilawar Singh, aided by Balwant Singh and others.

During trial, Balwant Singh refused counsel, asking instead to be allowed to represent himself. He did not cross-examine witnesses. He was awarded the death penalty. In 2009, when his death sentence came for conviction in the High Court [as part of the legal process], he again refused counsel and asked to be allowed to argue his own case. His intent in each instance was not to seek acquittal. In the 14 years that the case made its way from the trial court to the High Court, Balwant Singh held to his story, claiming that he strapped the bomb on to the body of Dilawar Singh. The High Court, noting that there was no evidence in favour of Balwant Singh in order to “have a second thought on the murder reference of Balwant Singh, coupled with his three confessional statements, there is no other alternate with us but to confirm” the death penalty. Balwant also refused to appeal against the death penalty administratively through mercy petition to the Governor and/or President. In a letter to the Chief Justice of the High Court, he writes, “legal system, judicial system of this Country and the rulers of this Country have been discriminating” [and that] “slavery of such system is not acceptable to me”. In embracing 17 years of imprisonment including solitary confinement and ultimate execution, Balwant Singh is making a political statement. 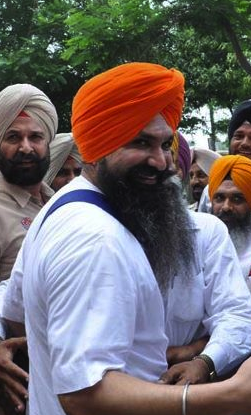 In his letter and statements, he brings out his search for justice in the democratic framework, his feeling of marginalization and his desire for rebellion. He sees the injustice of the swiftness of response when a five star hotel in Mumbai is under siege and the dilatory tactics of commissioning enquiry committees without any accountability for the thousands who perished in the 1984 Sikh pogrom. He writes, “thousands of Sikhs were massacred. It is submitted that these murderers have neither been punished nor been punished by any Court of law of the country even after 25 years […] Here I would like to ask your Lordship that the persons who have killed thousands of innocent xxxx, xxxx, and xxxx [redacted] are not the terrorists. Why not the law of the nation, [redacted] try to interfere in the matter. On the contrary, when the hotels of Mumbai are attacked then the military of the country immediately interferes. The commandos of Delhi initiate immediate action after reaching Delhi. This is made to known as to which in which village the assailants reside in [redacted]. Contrary to it, the [redacted] of [redacted] of people in Delhi could not be identified. How the security can be assured without the law when everybody knows the killers” [sic]. He locates the justification for the suicide bombing in this persecution by the state (as per his contention) and the lack of accountability saying in a statement to the District and Sessions Judge, Patiala, “conscience of a person have self respect refuses to accept the authority of callous rulers. Such feels instigate a person for becoming human bomb rather than to become a human being [sic]”

The purpose of this article is not to romanticize Balwant Singh or terrorism. But surely some introspection is required when an obviously bright individual seeks political expression in the rejection of the “democratic” government itself even at the cost of his own life? Our democratic systems are discriminating – on class, caste, and religious lines. After 64 years of democracy, which by definition means people’s control over the state to ensure propagation of their interests, more than 3 quarters of our country still ekes out a living on just Rs 20 per day. In our ostensibly secular state, all significant minorities have been persecuted (1984, 1992, 2002, 2008) without any accountability. Likewise the constitutional promise of equality before rule of law is flouted routinely. The poor are routinely displaced, their rights violated, their very being often declared illegal. The poor overwhelmingly populate our jails; around 70% are under-trials, not convicts. The death penalty too is disproportionately administered to the poor. Balwant Singh’s execution is now embroiled in cynical politics from all sides, however whatever the outcome, we all share some blame in perpetuation of a system where meaningful political expression, redress and justice is denied to all but a small minority.