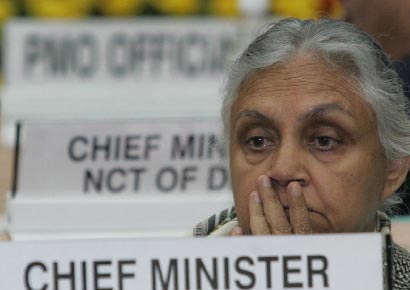 Jalandhar, Punjab: The showdown between Delhi CM Sheila Dikshit and her Punjab counterpart over the affairs of Delhi Sikh Gurdwara Management Committee (DSGMC) continues to rage and has got shriller on Sunday.

On Friday, Badal had sought putting a “leash” on Dikshit-led Delhi government and action against those who had attacked the SAD(B) leaders at Rakabganj gurdwara. A day later, Dikshit asked the Punjab CM to keep off Delhi gurdwaras’ affairs. Reacting to this, the Punjab CM on Sunday justified meddling in DSGMC’s matters because Shiromani Akali Dal (SAD) had fought during gurdwara reforms movement and made sacrifices after which SGPC and DSGMC were constituted.

Badal said that before questioning the role of SAD in the affairs of DSGMC, Dikshit should explain the rationale behind the “ill-conceived” move of amending the Delhi Sikh Gurdwara Act, 1971 enacted by Parliament. He made these remarks while responding to queries at Khiala village.

“SAD has every right to participate in the affairs of the DSGMC. Rather Delhi CM should not forget that SAD was contesting the DSGMC elections ever since its inception due to which they were fully entitled to raise their voice against any interference by the government in the religious affairs of the Sikhs,” Badal said.

Previous: New Delhi Fight to control gurdwara panel hots up ahead of polls
Next: Ponty Chadha: Inside story of bloodbath