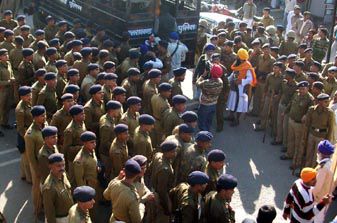 Uttarakhand, India: The Uttarakhand police on Wednesday prevented the entry of Sikh Vehicles into the state, thus the Sikhs travelling to Haridwar had to stay in the territory of Himachal Pradesh.

The Uttarakhand police stopped all Sikh vehicles at Kulhal barrier.

The Sikh community, anguished over the attitude of the Uttarakhand government, also blocked the traffic for more than three hours, thus no traffic was allowed between the two states.

About 300 people of the Sikh Community wanted to reach Shri Gyan Goddari Gurudwara, demolished during the Sikh Genocide in 1984 in Uttarakhund near Haridwar on the eve of Gurupurab. The Sikh devotees were arrested on total false charges of destabilizing the peace. The traffic was restored at around 3pm. Later the devotees were released by the police but not allowed to visit historic Gurdwara.

Offical still refuse to admit that the Uttarakund government did not want the entry to the Sikh Jathas who raised demands related to Shri Gyan Goddari Gurudwara. They did not release any statement as they are very aware that they are very wrong as per consitutional legal right.

After denying entry to the state, the Sikh Jatha arrived from Punjab camped on the highway which
turned into a traffic blockade later on. The congregation of a large number of personnel of the Uttarakhand police at the border with Himachal Pradesh clearly indicated that the Uttarakhand police had done adequate arrangements for preventing the entry of Sikh Jathas.

Baba Baljit Singh of Gurdwara Gyan Goddai Dharm Yuad Morcha was also present during the entire episode. All India Sikh Council chief Gursharan Singh Babbar termed the prevention of entry into the Uttarakhand an attack on the democracy and added that the Jatha wanted to reach Haridwar peacefully.

Meanwhile SP GC Dhayani, Dehradun (rural), interacting with mediaperson at the border, said that the entry was prevented to maintain the law and order situation around the gurdwara site.

It may be recalled that the Gurdwara was demolished in November 1984 by angry Hindu mobs. Sikh community has been time and again demanding the reconstruction of the shrine.