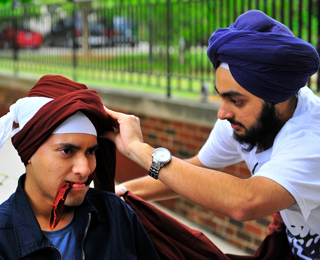 Turbaned Sikhs Are Not Terrorists

California,US: I was on my way to lunch with one of the partners at a prestigious law firm when we both heard it: a random person on the street yelling at me, “Terrorist … hey, terrorist!”

I was in the process of trying to secure a job. Like any other law school student, I just wanted to fit in at the firm where I was spending my summer. I smiled and changed the subject, avoiding what would inevitably be an awkward conversation, even though the taunts tore me up inside.

Sadly, what happened isn’t a rare event. I can guarantee you that any man who wears a turban in the United States has been taunted or discriminated against at some point.

This year the dangers faced by Sikhs in America turned into tragic headlines: In Oak Creek, Wis., six Sikhs were killed just weeks before another hate crime in Seattle, in which a Sikh cabdriver was brutally assaulted simply because of his appearance.

As a Sikh, I am mandated by my faith to wear a turban and keep a beard. As an American, born and raised in a nation where freedom of religion is a given, I generally do not think too hard about how these symbols make me look “different.” But sometimes the difference has to be addressed.

Why, if I wanted so badly to fit in at that law firm that was hiring, did I have to stand out instead? Sikhs choose to visibly affirm our values as a way of life, and we are required to be recognizable for our principles. Quite literally, we wear our beliefs on our heads. Turbans were once the clothing of kings alone, so Sikh gurus (teachers) decided that if everyone wore a turban, there could be no social differentiation. Our turbans are a recognition of this belief and a reminder that our actions reflect on our entire community, and that we have a duty to always help those in need. Ironically, in the United States the turban that singles us out has become associated with the exact opposite of what it symbolizes.

Guru Nanak, the founder of Sikhism in India in the 15th century, believed that all people are born free and should live freely and equally. He spoke out against inequality, religious intolerance and the pervasive caste system in India.

Growing up in the United States with these same values, I never felt that my religion and my citizenship were at odds with each other. To me, Guru Nanak’s teachings sounded remarkably similar to the words of Thomas Jefferson: “We hold these truths to be self-evident, that all men are created equal, that they are endowed by their creator with certain unalienable rights, that among these are life, liberty and the pursuit of happiness.”

Yet Sikhs are often the target of ugliness and discrimination. Almost every time we travel, for example, we are selected for a pat-down or a full-body scan. We see the dirty looks; we hear the whispers behind us. When I travel, I call someone on my cellphone so people around me can hear my American accent. I try to demonstrate what my turbaned uncle, who built and ran the Hollywood Wax Museum, told me: Sikhs have been a proud part of the fabric of the United States for 100 years, and it is time for all Americans to recognize and respect that.

In January, California’s Workplace Religious Freedom Act goes into effect, protecting the rights of workers and job applicants to wear religious clothing or hairstyles. These are critical first steps in combating hate.