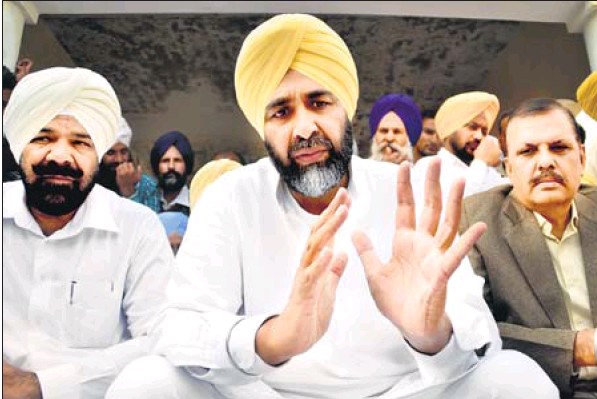 Trouble ferments for distilleries: PPP to join protest to save drain

Comments Off on Trouble ferments for distilleries: PPP to join protest to save drain 553 Views

Bathinda, Punjab: The People’s Party of Punjab (PPP) has decided to join the protest against the distilleries polluting the Lasara drain in Talwandi Sabo.

The PPP would hold a protest against the decision of the state government to allow two distilleries on the banks of the drain that was choked with industrial effluents already, party president Manpreet Singh Badal said here on Friday.

The distillery issue came to light after the pollution control board had found the new unit of Bathinda Chemical Limited violating its norms and discharging waste in the Lasara d ra i n at Mashan a village. Villagers protested against another distillery coming up at Sangat village.

The distilleries are 2 kilometres apart. A legislator of the Shiromani Akali Dal, ruling party in the state, is said to be the owner of the unit at Sangat. “How can the pollution control board allow distilleries so near a drain choked with industrial pollutants already,” said Manpreet. “We’ll join the affected villagers in a protest march.”

The drain gets blocked when it reaches the Haryana border. If polluted water flows into the Lasara, it will create ecological crisis in the villages on its edges. The association for democratic rights was the first to ask the government to put the two distillery projects on hold and analyse the possible threat to the environment.

Here to address the district workers of his party, Manpreet said the PPP had postponed its plan of getting the opposition parties together on November 20. “The Congress had its own plan,” he said.

The Sanjha Morcha, alliance of which Manpreet is chairman, has to pursue its own plan of protest against the government. “It will hold a convention at Desh Bhagat Yadgaar Hall in Jalandhar on December 5 to discuss the various problems of Punjab and find out the solutions,” said the PPP leader. “The morcha will also observe protest week from December 10 to 17.”

During the protest, the morcha’s district units will observe fast at district headquarters to oppose both the Centre and the state government of the issues of law and order, electricity tariff hike, price rise, and low minimum support price to farmers. The dharna in Bathinda will be on December 15 and the PPP’s show of strength during Maghi Mela in Muktsar.

2012-11-18
SSNews
Previous: Ponty Chadha: Inside story of bloodbath
Next: Sikh museum to be opened at Sultanpur Lodhi by Nov 26