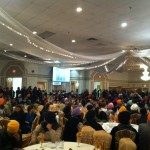 Toronto,Canada: While PM Harper is on a visit to India, thousands of Canadians gathered in Toronto to protest against the ongoing impunity to the members of the ruling Congress party of India, who organized genocidal attacks on Sikhs during November 1984. The gathering urged Canadian Prime Minister to raise with his Indian counterpart, the issues of denial of justice to the victims of the 1984 Sikh Genocide and India’s nefarious campaign against Canadians branding them as “supporters of terrorism”.

November 2012 marks the 28th year of Genocide of Sikhs in which more than 30,000 Sikhs were murdered and more than 300,000 were uprooted throughout India.

Sikhs for Justice (SFJ) an international human rights organization which is working to get the November 1984 violence against Sikhs recognized as Genocide announced to file a petition before United Nations. The petition will ask the UN to investigate the systematic, intentional and deliberate killing of Sikhs during November 1984 and recognize it as “Genocide”. The rights group has launched a campaign “1984 Yes, Its Genocide” to collect million signatures in support of petition to the UN.

Gurpatwant Singh Pannun, legal advisor to SFJ stated that since Indian judiciary has miserably failed to punish the known ruling Congress party leaders for their role in November 1984 genocidal attacks, to seek justice Sikhs will petition to the United Nations Human Rights Commission in November 2013.

Rights group has also submitted a memorandum to PM Harper stating that Canadian Sikhs are being branded as “Supporters of terrorism” by the Indian Government only because they are in the forefront of campaign to raise awareness about 1984 Sikh Genocide. Through its embassy and consulates, Indian officials are spying on members of our community and threatening retaliation against their relatives in India, the memo further states.

Indira Prahst, Chair, Department of Sociology and Anthropology, Langara College and Race and Ethnic Relations instructor who specializes in Sikh human rights issues, stated that November 1984 is neither riots nor pogrom but the organized violence against Sikhs is simply a case of Genocide.

Jay Grewal, SFJ’s Director, International Policy stated that we will lobby with Parliament of Canada to bring a private member’s motion seeking to recognize the organized violence against Sikhs during November 1984 as Genocide.

Sikh Genocide and Sovereignty Conference was organized by SFJ with the support of Ontario Gurudwaras Committee (OGC) an umbrella organization representing Gurudwaras across Canada, and other Sikh organizations.

Previous: Khanda Poppy Project for Remembrance Sunday
Next: A Candle in the Dark – An Exhibition of Sikh History by National Sikh Youth Federation (UK)