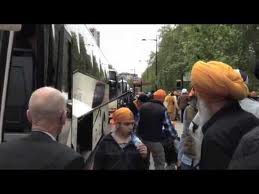 Comments Off on Temple massacre brings peace and healing 474 Views

Oak Creek, Wisconsin : The night before Thanksgiving, I stood with a reformed white supremacist at the Sikh Temple of Wisconsin in Oak Creek. It didn’t frighten me as I thought it might, although I did feel some apprehension about coming to the temple. But I wanted to be there that night, to know that what we were doing would make a difference.

The event was the Heritage Day Dinner, made possible by the sons of Satwant Singh Kaleka, who was killed Aug. 5 protecting his people from the shooting spree of a white supremacist.

Amardeep and Pardeep Kaleka have turned their father’s death into a mission to “eliminate fear, end violence and build community,” by helping to build the organization,

Started by families of the temple to “link interfaith youth from diverse belief systems, to build a better world,” Serve 2 Unite held its first annual Heritage Day, culminating in the dinner. Their goal is to have schools set aside the Wednesday before Thanksgiving for children to share their cultures with each other, using education to eradicate the hate that fueled their father’s murderer. This year, 200 schools participated from as far away as Paris and Australia.

As a mother of two teachers, I know of no better way to change the world than to start in the classroom. Young minds are eager to learn and understand. They are filled with hope. As an adult, raised in a world with far too much prejudice and ignorance, I came to the temple that night to learn, to understand and, perhaps even, to find hope.

The program featured presentations from different cultures. First to speak was Art Shegonee, known as Canasa, or Little Golden Eagle, from the Menominee and Potawatomi tribes. He held up a braid woven from sweet grass; its meaning is to teach us to see the positive over the negative. His message to the diverse crowd: “You are not foreign; you are part of our land; you are welcomed.”

Each speaker shared insights that made me feel as though I was witnessing a rebirth of our nation. James Hall of the NAACP spoke of the fight for inclusion and equal rights; Darryl Morin of LULAC (League of United Latin American Citizens) said, “We are the defenders for those who have no voice.” We heard from Hmong, Christians and many others.

Then came an amazing moment. Arno Michaelis, the reformed skinhead I had stood next to, got up to speak. He turned to face Pardeep Kaleka. Tearfully, Michaelis explained how his once-hateful beliefs consumed him and could drive a person to kill. He’s not that man anymore and now is a leader in the fight against hate. Pardeep Kaleka finally understood how such hatred could lead to violence. He forgave him and called him “my brother.”

I wondered, could I do that? Could I forgive, even embrace, a man who had once walked in the same shoes as my father’s killer? The answer came unexpectedly.

Amardeep Kaleka presented Nomi Lerman from the Jewish community and Halah Ahmed from the Muslim community. The intention was to focus on the ongoing conflict between Israelis and Palestinians in Gaza. The women instead showed us how alike they were with their message of compassion to “love your neighbor as yourself.”

Amardeep Kaleka used that message to show us how the Sikhs had survived the tragedy there: by sharing the healing powers of meditation. Musicians from the temple began playing music, as scenes of destruction from Gaza were shown on a screen. He asked each woman to alternately repeat their words for peace: Shalom, salaam, shalom, salaam, shalom, salaam. Their rhythmic voices blended with the beat of the drums.

Tears welled in my eyes at the sight of the carnage on the screen, in sharp contrast to the soothing words being spoken to heal me and the rest of the world. When the music ended, the two women embraced. I dared to hope that someday Israel and Palestine could come together as well.

Suddenly, something special happened. Little Golden Eagle approached the women and gave them the sweet grass that he spoke about earlier. He began to pray over them and for all those suffering.

I was overwhelmed with emotion. It made me realize that I, too, could forgive. This was not a part of the program, but it accomplished everything the brothers and the Sikh community had hoped for: peace and healing.