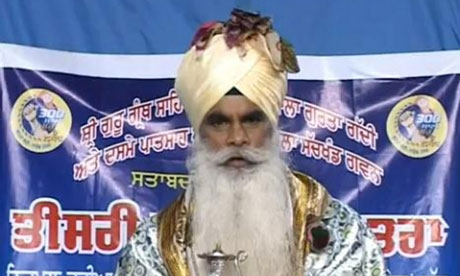 UK:- Sant Baba Jeet Singh and his followers want English courts to intervene in international dispute over ownership of gurdwaras

The supreme court is considering whether it should rule on the spiritual status of a Sikh leader and examine his claim to be a “holy saint”.

The highly unusual application made by Sant Baba Jeet Singh Ji Maharaj and his followers would force the courts to intervene in an international religious dispute over the ownership of three gurdwaras, or temples, in Bradford, Birmingham and High Wycombe.

Jeet Singh was installed as the “Third Holy Saint” and head of the Nirmal Kutia Johal branch of the Sikh religion in Punjab in 2002 but his legitimacy has been challenged. Former members of the temples’ management committees now control some of the gurdwaras.

In May the court of appeal declined to become entangled in the row, warning that judges should not adjudicate on the type of doctrinal matters that preoccupied 19th-century courts.

“The resolution of [this] issue,“ Lord Justice Mummery said, “depends on the religious beliefs and practices of Sikhs in general and the Nirmal Kutia Sikh institution in particular.

“The English courts are not equipped to adjudicate on the issue of succession by reference to religious beliefs and practices, either with or without expert evidence.

“If this case were allowed to go to trial the judge would be placed in an invidious position not unlike that of jesting Pilate, who said ‘What is truth?’ and would not stay for an answer.”

Despite that setback, followers of Jeet Singh are seeking permission from the supreme court to challenge the appeal court ruling that the case was not “justiciable” – able to be tried in court.

The supreme court confirmed that it was examining legal submissions to assess whether the case was admissible. If it accepts there is an important legal issue at stake there could be a full hearing next year.

Jeet Singh’s supporters insist there are broader issues, such as whether the rights and powers held by individuals within religious institutions can be enforced in a UK court of law or become worthless.

Luke Patel, of Blacks Solicitors, which represents Jeet Singh and his followers, said: “His succession is a factual issue, not a religious issue. The highest court in India has given a judgment to say that his is the true succession.

“If the courts decline to look at this it would be saying that they are not interested in the administration of any English charities [with a religious link]. That would be wrong. This could apply to all sorts of other organisations: mosques, synagogues or temples.”

The application to the supreme court is also based on human rights law, arguing that it would amount to discrimination to consider administrative issues in relation to the Church of England but not for minority faiths.

If unsuccessful at the supreme court, lawyers may petition the European court of human rights in Strasbourg.

There are about 500,000 followers of the Nirmal Kutia Johal branch of the Sikh religion globally; tens of thousands of them live in the UK.