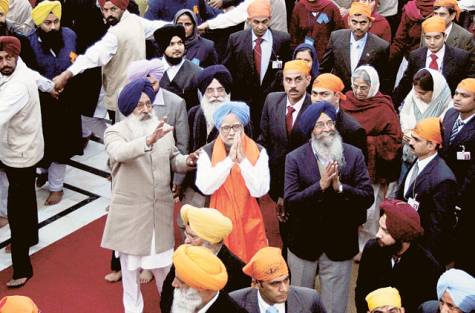 Amritsar, Punjab: A day after the incident of wavering of Black flags to Prime Minister Dr. Manmohan Singh during his visit to Golden Temple by the supporters of Anna Hazare, a strong notice was taken by the SGPC president Avtar Singh Makkar.Describing protesters as unscrupulous elements, Makkar said that it was handiwork of people who have poor psyche, protesting in front of the Golden Temple. He said that it was an intolerable act. Makkar said that Golden Temple is highly respectable and spiritual place but not to carry out any protest.

Makkar said that during the visit of Prime Minister Dr. Manmohan Singh and his wife Gursharn Kaur were extended warm welcome by the SGPC. However, SGPC would never tolerate any mischief act which was committed by supporters of Anna Hazare on the eve of New Year. Condemning the protesters, Makkar said that such people never belong to any religion and were never liked by anyone in the society.

Blaming Indian intelligence agencies which scrutinized each nook and corner around the Golden Temple keeping in view the arrival of Prime Minister, Makkar said that SGPC never objected since SGPC always extended welcome to each and every devotee to Golden Temple irrespective of caste, creed and materialistic position. Makkar said that how it happened in the presence of such a heavy security, whereupon protesters while breaching the security net of Prime Minister succeeded to carry out their protest in front of him.

Makkar said that during the arrival of PM, each staff member of the SGPC were issued special passes so that no outsider  could come near to PM and here it was more shocking that more then 40-50  protesters succeeded to wave black flags to PM and raised objectionable slogans. However, former SGPC secretary and former Punjab education Minister Manjit Singh Calcutta described the incident awful and alleged that it was carried out on the behest of RSS which has close relations with BJP. 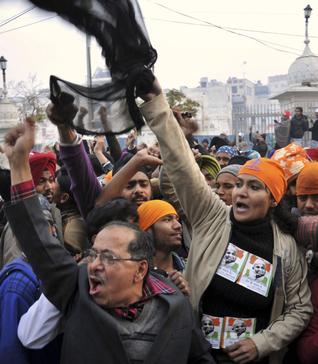 Manmohan Singh arrived here on Saturday evening from New Delhi. He stayed overnight at the government Circuit House. The visit was a private one, a police officer said. A devout Sikh, the prime minister last visited darbar sahib in March 2009, a few weeks after his coronary bypass surgery in New Delhi. Manmohan Singh, who studied in Amritsar after his family migrated here from Pakistan after partition, has relatives in this city.

Team Anna later denied its involvement in the black flag protest and said “it is a reflection of what people feel and think” about the Lokpal and the government. “I guess this is the result of people’s mood as they want a stringent anti-corruption law and this is being not done,” Shazia Ilmi said in New Delhi.

Ilmi said the prime minister, cabinet ministers and leaders of political parties would have to face such protests.

Many organizations today condemned the demonstration against Prime Minister Manmohan Singh during his visit to the Golden Temple on Sunday. In a statement issued today, Dr Mohinder Singh, Member of the National Commission for Minority Educational Institutions, said, “The demonstration by a few misguided individuals in the name of Anna Hazare is an act of national shame. It is all the more shameful that the sacred premises of the Golden Temple, a symbol of harmony and peace, was used by these people to gain cheap publicity.”