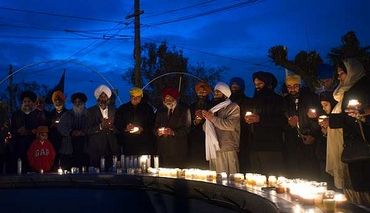 Stockton, California: Members of the San Joaquin County Sikh community hold a candlelight vigil Sunday at the Sikh temple in Stockton in sympathy for the people killed in the shooting massacre as Sandy Hook School in Newtown, Conn.

Under slate-gray skies slowly turning to charcoal and despite a damp, penetrating breeze, dozens of San Joaquin County Sikhs gathered Sunday evening to commemorate and express their sadness over Friday’s tragedy in Newtown, Conn.

Even as that New England community held its own multifaith memorial service, at which President Barack Obama expressed the sorrows of a nation, those gathered at the Gurdwara Shahib, Stockton’s Sikh temple, lit candles, prayed and spoke of the shootings that took 28 lives, including 20 children.

Kuljit Singh Nijjar, the temple secretary, describes the killing of the innocent children as the most heinous crime.

“As an American, as a community of Sikhs, our sympathies go out to the families,” he said.

American Sikhs were victims in August, when a lone gunman killed six people at a temple in suburban Milwaukee.

But Nijjar said tragedy of the lives lost in Connecticut go beyond a single community or creed.

And the response to such a crime should also be universal.

“We should stand together no matter who you are, no matter what religion you belong to,” Nijjar said.

About 5 p.m., the gathering began around a courtyard fountain outside the temple on South Grant Street.

Men, mostly in turbans, women wearing head scarves and children, many the ages of those who died in Newtown, sat or stood solemnly as dozens of votive candles were lit.

Carlos Villapudua, a San Joaquin County supervisor who was addressing the candlelight vigil, underlined the parallel.

Sonny Dhaliwal, the mayor of Lathrop and an organizer of Sunday’s vigil, spoke out against the violence.

“We pray to God, there has to be a divine intervention to stop these mass murders,” he said of the long, sad list of multiple-victim shootings in this country.