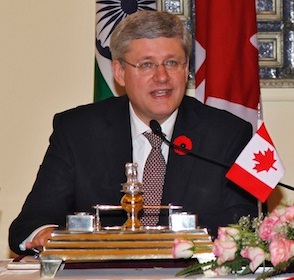 Ludhiana,Bangalore, India : According to media reports the Canadian Prime Minister Stephen Harper, who is on a visit to India and has received complaints about political activities of Sikhs in Canada concerning the political rights of Sikhs in India, said on November 08, 2012 that “he won’t interfere with the political rights of Canadian Sikhs who advocate a separate state in India — even though his government firmly opposes the idea”.

“However, Harper indicted the Conservative government would take action if it detects that those Sikhs turn to violence to advance their cause” o.Canada.com reports

According to “The Globe and Mail” news report the Canadian Prime Minister said during a visit to the southern Indian city of Bangalore Thursday: “It may be a political position that both the government of Canada and the government of India disagree with,” but “we can’t interfere with the right of political freedom of expression.”

“The government is completely supportive of the unity of India,” Stephen Harper, is reported to told reporters during a press conference held at Bangalore on November 08, 2012.

The Canadian PM reportedly added that his government monitors “extreme developments – those who may embrace violence or threats of violence or terrorism” and further that “We watch these things very closely and we work very closely with our partners in the government of India.”

According to media report the Canadian Prime Minister found himself pressed by the Indian government minister during his six-day trade visit to the south Asian country on what New Delhi calls a revival of “anti-India” voices in Canada.

It is notable in 2010 the Canadian Sikhs had strongly opposed the Canada visit of Indian Minister Kamal Nath, who is considered to be a prime suspect of Sikh Genocide 1984. In June 2010 a petition was moved in Ontario Parliament to seek recognition for November 1984 killing of Sikhs as “Genocide” as defined in Article 2 of the UN Convention on prevention and punishment of the Crime of Genocide.

Since then Indian authorities have repeatedly alleged that Sikhs in Canada are extremists, urging Canada to “curb” the “Sikh extremism”.

Recently India has started accusing the Sikh diaspora for plotting to revive militant movement in Punjab. These efforts are being viewed as attempts by Indian State to contain political activism of the Sikh diaspora.

As the Canadian PM Stephen Harper is on a visit to India, many Sikh organizations have asked Mr. Harper to raise the issue of denial of justice to the victims of 1984 Sikh Genocide with the Indian authorities.