Comments Off on State to send 3,000 Sikhs to Pakistan gurudwaras 547 Views

Hyderabad,India: For the first time, the state government has decided to send a ‘jatha’ (group) of 3,000 Sikh sehajdhari pilgrims to Gurudwaras in Pakistan on the occasion of the birth anniversary of the first Sikh Guru, Sri Guru Nanak Devji.

The Andhra Pradesh State Minority Finance Corporation (APSFMC) , Hyderabad district, executive director told Express that they have received a message from the Union Ministry for Minorities Welfare on Thursday that the pilgrims would be sent to Pakistan from November 23 to December 2.

Interested Sikh pilgrims can submit their applications to the district collector before October 22, he said, adding that the same would be sent to the central government.

Welcoming the decision, the Prabhandak Committees of various Sikh Gurudwaras in Hyderabad and Secunderabad wanted the government to extend the last date for submission of applications by at least one week.

They wanted the government to bear the expenditure on the same lines it has been doing to other minority communities like Muslims (Haj pilgrimage) and Christians (for Jerusalem). They also wanted the APSFMC to issue proper guidelines on the issue for the benefit of Sikh pilgrims. 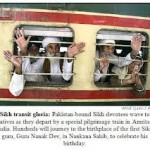