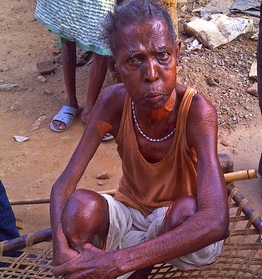 Starving in India: The Forgotten Problem

Comments Off on Starving in India: The Forgotten Problem 194 Views

These days, Indian policymakers are debating how to create a vast new food entitlement program. There is talk of poor households struggling to cope with high food prices and malnourishment among their children.

What you don’t hear much about, however, is the most tragic and outrageous consequence of India’s failure to feed its people adequately: starvation deaths.

India is a nation that prides itself on having been self-sufficient in food production for decades and having leaped forward economically over the past 20 years. So it isn’t surprising that public officials and even many in the media are reluctant to face up to the painful reality that hunger persists in 2012. Starvation doesn’t fit neatly into the story of a “shining” India.

But India is also a nation with about 360 million people living under the official poverty line – more than any other country – and starvation is all too real.

Just ask Paro Devi of Manjhladih village in the eastern state of Jharkhand. Her husband, Padamchand Hazra, earned $1.50 per day doing construction labor and riding a cycle rickshaw. Food was always scant in their house. They were surviving on a razor’s edge.

In the summer of 2010, the government-run food distribution program in the area shut down when the local ration dealer stopped distributing grains. The dealer said he simply ran out of inventory, but a senior local official said the village had been given a full allotment of food and shouldn’t have run out.

Around the same time, construction work dried up. The family went days without food. Mr. Hazra grew thin and weak, and was unable to work.

One day, “about six in the evening,” Ms. Devi recalled, “he asked me to put the khattiya (makeshift bed) outside. He wanted food. He kept asking for it but there was no food in the house.”

I set out last September with my colleague Ankita Aggarwal from the Centre for Equity Studies, a New Delhi think tank, to investigate deaths that bore the hallmarks of starvation in three Indian states: Bihar, Jharkhand, and Madhya Pradesh — the country’s “hungriest”, according to the International Food Policy Research Institute, a non-partisan group that advocates policies to fight hunger and poverty.

Each state fares worse than the abysmal national averages in nearly all nutrition indicators, including height for weight and age of children and mortality rate for children under five years old.

Historically oppressed and disenfranchised lower castes and tribal populations – known as “scheduled castes” and “scheduled tribes” — are the poorest of the poor and the most at risk. It is no surprise that most reported starvation deaths occur in these communities. In Bihar the under-five mortality rate for scheduled castes is 113 deaths per 1,000 births, compared to the state-wide average of 85 and the all-India average of 74.

We visited 30 scheduled castes and scheduled tribe families that had reportedly lost at least one man, woman, or child because of a lack of food in the house. Our goal was to reconstruct exactly what happened in each case. What were the living conditions that led to these catastrophes? What was the government response? What should policymakers do to correct this as they write a national food security law?

One of the clear themes that emerged was that India’s current system of distributing food to the needy is seriously flawed. Inefficient planning leaves grain rotting in government warehouses rather than getting to the hungry. Botched government surveys leave poor families without the ration cards to which they are supposed to be entitled. Corrupt ration shop dealers pilfer food and sell it on the black market rather than to intended beneficiaries.

Drawing clear lines between chronic malnutrition, hunger and starvation isn’t straightforward. One international standard for measuring hunger is the body mass index, or BMI, which refers to an individual’s weight relative to height – a proxy for body fat. The internationally acknowledged threshold for a “normal” BMI is 18.5. An individual with a BMI of 17 to 18.4 is “undernourished”, someone with a BMI of 16.0 to 16.9 is considered “severely malnourished” and a BMI less than 16 signifies a person is “starving”.

Based on government estimates that 35.6% of Indian women and 34.2% of Indian men have BMIs less than 18.5, the Planning Commission’s India Human Development Report states, “If India is not in a state of famine, it is quite clearly in a state of chronic hunger.”

Dr. John Butterly, executive director of Dartmouth-Hitchcock Medical Center in New Hampshire and co-author of “Hunger: The Biology and Politics of Starvation,” says chronic malnutrition often leads to a compromised immune system and makes a person unable to fight off organisms “that a normally fed human would barely notice.”

Hunger doesn’t happen in isolation. Inevitably, our research exposed us to a range of economic and social ills in rural India and led us to incredible stories – tales of totally defunct public food and work programs, corruption, broken hand pumps for water, decrepit dirt roads, and caste exploitation.

In the coming days, we’ll be telling these stories, hoping to show empirically why India needs to overhaul its approach to hunger.

India is a food surplus nation but according to the International Food Policy Research Institute’s 2011 Global Hunger Index, it ranks 67th out of 81 countries and has more than 200 million food-insecure people, the most in the world. (The Hunger Index measures hunger based on the percentage of a country’s population that is undernourished, the proportion of children under five years old who are underweight, and the mortality rate of children under five.)

In mid-January, Prime Minister Manmohan Singh called India’s malnutrition problem a national shame after a survey revealed that 42% of the nation’s children are underweight. Officials in the prime minister’s office did not respond to requests for comment for this article.

In a statement in response to written questions, an official at the Ministry of Health and Family Welfare said the public health system should ensure all needy citizens can access medical care. “Those who are malnourished are likely to be amongst the ‘poorest of the poor’ towards whom the public health system has an added responsibility as this is the only avenue where they can receive free medical care and attention,” the statement said. It is difficult to generalize why starvation deaths occur, the statement said, because there are special local factors at play in every case.

The entire debate over food security – the push by many in civil society for a universal “right to food” – has its roots in starvation deaths. In 2001, activists blamed Rajasthan state for failing to stop a string of hunger-related deaths, especially with millions of tons of unused grains in government warehouses.

That and other national woes were the catalysts for the public interest litigation filed by the People’s Union for Civil Liberties in 2001, which resulted in the Supreme Court’s decision to convert nine food, work and nutrition programs into legal entitlements. The heart of the PUCL’s case was that the Indian Constitution’s right to life as spelled out in Article 21 entitles Indians to a right to food.

Eleven years and nine court orders later, the right to food case is still going and is largely responsible for pushing the government to develop food security legislation, which is expected to be debated in Parliament in the coming months. The draft bill would give 75% of rural Indians and 50% of urban Indians access to discounted rice and grains.

The Centre for Equity Studies is involved in the food security debate, advocating reforms based on our extensive research into hunger and starvation. CES is also producing a book on the history of India’s right-to-food movement. Harsh Mander, the organization’s director, is also a member of the National Advisory Council, an independent body of experts that advises the government on social development issues, including food security.

As I will explain later in this series, we believe the bill as proposed doesn’t go nearly as far as it should to identify starving people and ensure they receive the benefits the courts have said they are entitled to.

A government response to a starvation death requires public officials to admit that one happened – and that it was the result of negligence or corruption. As we found again and again during our investigation, officials often are reluctant to make such an acknowledgement.

Trying to prove that someone died because of starvation is tricky in poor communities where a variety of health problems are prevalent. People commonly suffer from ongoing, untreated illnesses such as tuberculosis, malaria, and chronic fever. What is clear though, doctors say, is that a lack of access to food can greatly exaggerate and complicate other health problems and put people’s lives at risk.

When a poor person can’t access entitlements to government food and work programs local officials often find it convenient to attribute their death solely to a pre-existing disease. Sometimes the officials attribute those deaths to alcoholism or lifestyle choices. This isn’t always the case, of course – some officials are upfront about the fact that starvation deaths are a reality and have to be confronted.

In his book “Starvation and India’s Democracy,” a study of starvation deaths in Orissa and West Bengal, food security expert Dan Banik argued that those in authority “do not expect to be held accountable to persistently high levels of under-nutrition and are confident that such issues are accepted by society as a natural feature of a poor country with a large population.”

As for Ms. Devi, her family’s situation improved slightly after her husband’s death. Government food distribution resumed and she is eligible for her full quota of 35 kilograms of subsidized rice. But she hasn’t gotten promised benefits like a widow’s pension and continues to live on the brink.

“We still don’t eat to a full stomach,” Ms. Devi said. “I haven’t tasted dal (lentils) in so long I forget what it tastes like.”

Previous: Chattisinghpora massacre was handiwork of Indian Army: Conduct fresh probe
Next: Sikhs to have own law for registering marriages – Anand Karaj Act