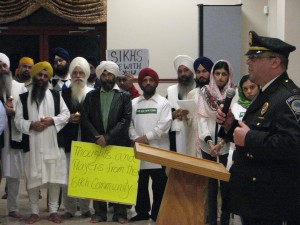 On Friday night — a week after tragedy struck Newtown, Conn. — mourners from all walks of life in Southington gathered at the temple to remember the 20 children and six staff members from Sandy Hook Elementary School whose lives were cut short.

“Everyone is broken-hearted,” said Surinder Chawla, secretary of the temple’s board of trustees. “It’s a very tragic time for everyone.”
Kulwant Samra, president of the board of trustees, said it was decided to hold a vigil the day the shooting happened. There’s no religious reason behind the vigil, Samra said, because “it’s for humanity.”

During the vigil in the temple’s community room, several speakers reflected on the events of the past week. Behind the podium were photos of the 26 students and staff members murdered. About 130 people attended the vigil. Some wore green ribbons, others T-shirts that read “We Are Newtown.”

“I can’t even begin to imagine what Newtown is facing, but I’d like Newtown to know we are there for them,” said Aman Samra, a member of the temple who helped lead the vigil. “At times like this, no matter what we do it’s not enough.”

State Sen. Joe Markley, who spoke at the August vigil, was again present to offer his thoughts.

“The last time you invited me here to speak was a similar and tragic situation in August,” he said. “It doesn’t seem that long ago.”
Markley said the Newtown tragedy hit home because of his previous work as an English teacher. He often taught poetry, and turned to the art form to express his feelings. He also spoke about Adam Lanza, the 20-year-old man who walked into Sandy Hook Elementary School and opened fire, killing 20 children and six adults before killing himself.

“We grieve for 26 people slain, but there was one other person dead who was a boy that I think was possessed by evil, a demon, to have done what he did,” Markley said, “and somebody I think we must pity and not hate, for that.

As Markley continued, he had trouble putting words to Lanza’s horrific act.

“When I think of the action, I think whatever you planned to do the moment you stood there in the classroom and saw those children,” Markley said, “I think, how could you do that?”

Also speaking were Town Council Chairman John Dobbins, several Board of Education members and Police Capt. Edward Pocock III. Many members of the Southington Fire Department were also present but had to leave when a fire alarm came in.

“In this time of need, the people of Southington have gathered to show their support,” Dobbins said.

Speaking on behalf of the Southington Interfaith Clergy Association was its president, E. Richard Fortunato, who said the Newtown tragedy “has been one of the worst nightmares of my life.”

Fortunato urged those in attendance to stand up to violence, and said “we here in Southington are not going to put up with it.”
The Rev. Sandy Koenig, pastor of Plantsville Congregational Church, told the audience that “God weeps with us in these times.” The Rev. Carol Downs, pastor of the United Methodist Church of Southington, led the crowd in prayer, offering that “tonight in this darkness, we give you sorrow, tears and unanswered questions.”

“Tonight the town of Newtown is home to us all,” Downs said, “and its children are our own.”

The Sikh community was supportive of the victims in Newtown Friday night, many holding up signs that read “thoughts and prayers from the Sikh community,” “Sikhs are with you,” and “Sikhs can feel your pain.”

Bhupinder Singh, a young member of the Sikh temple, said he visited Newtown on Thursday night. He had trouble putting into words his experience. He said the air tasted different, and tears came to his eyes as he read the names of the victims written everywhere he looked.