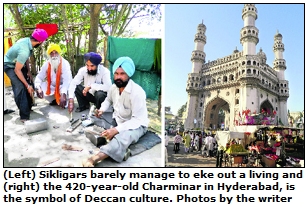 Society Of Sikhs in the Deccan

Hyderabad,India:Gurdwara Barambala (right), now in ruins, was constructed at Sikh Chhawniat. MANY of us in Punjab do not know about the defining traits of the Sikhs living in the Deccan. They have three types – Punjabi, Dakhani and the tribal Sikligars and Banjaras. For a local person, Sikhs have beard and turban who visit the Sikh “temple”. In case of need, a Sikh neighbour is the first among others to extend a helping hand. It is gratifying that essential tenets of Sikhism are practised by them.

The local people are rather scared of them. The heightened pomp and show of nagar kirtans and the devotees’ enthusiasm in brandishing siri sahibs and other shastars, combined with the agility of gatka players, definitely adds to the fear factor. At Halla Bol Chowk in Nanded, Holla Mohalla is a real warlike enactment.

Such “warlike” celebrations reinforce the chivalry of erstwhile Sikh forces. They fondly narrate how the presence of an ordinary Sikh generated confidence in the villagers’ minds. The Sikh soldiers provided security to people and materials valued by the Nizam. Such awe and fear of Sikhs is still fresh in peoples’ memory.

Dakhni Sikhs derive honour and self-respect from their ancestors who were much concerned about self-esteem. When Nizam gave them the jagir of Nirmal, they rolled farman into the muzzle of a gun and blew that off, saying: “We get salary from our Maharaja. Who is he to give us jagir?” The past and the present thus reinforce each other. They boast: “Singhan da dabdba poora hai ji.”

Dakhani Sikhs are the descendants of Sikh soldiers sent by Maharaja Ranjit Singh to support the Nizam. An Englishman writes: “Despite British influence, the administration was appallingly bad. Finance was hopelessly muddled. The countryside for half a century was dominated by Arabs and Rohillas.” This contingent reached there in 1832. Gurdwara Barambala, now in ruins was constructed then at Sikh Chhawniat in Kishan Bagh.

After the death of the Maharaja, some soldiers returned but those who remained there, married local women and adopted their language and culture. Elderly women dress in a saree at home and outside. The younger ones wear salwar-kameez while visiting a gurdwara. They are more fluent in Telugu than in Punjabi. At home they converse in Hindi, counted negatively by Punjabi Sikhs: “Sikh ho ke Punjabi nahin bolde”, suggesting they are lesser Sikhs. Punjabi can’t be their lingua franca in Telugu des.

Dakhani Sikhs also practise samuhik vivah held once in May at Sikh Chhawniat and twice at Hazur Sahib in April and December. This time, 22 couples tied their nuptial knot at Hyderabad. After engagement, marriage is solemnised the next day. The couples sit in a semi-circle at numbered “seats”, numbers they also carry on their shoulders. After Anand Karaj, doli is sent from the premises of the Guru Nanak School. Langar is also served to all. Each girl is gifted a television, a cycle and a sewing machine etc. worth Rs. 15,000 only. Earlier well off families also preferred this marriage. Reception is not hosted but some families do so against the directive.

All Dakhani Sikhs claim to be amritdhari but those who have taken khande di pahul are strict in observing rehat maryada but not those who partake amrit with kirpan. Earlier the latter practice was confined to women.

Punjabi Sikhs, as they call themselves are rich and affluent. Most of them have migrated in 1947 and later for business. They have ventured into many trades successfully. The motor parts are their monopoly. Wherever one goes in Hyderabad, Bagga Wines are there to greet you. They have an elegant and glossy directory of their own.

Dakhani Sikhs are far from affluence. They live in clusters and most of them make slums of the worst kind. Only a minuscule minority has climbed the ladder of development by hard work and education. Majority take to low level government jobs since they prefer service to business. Many work as auto/taxi drivers. Some indulge in petty trading.

The difference between Punjabi and Dakhani Sikhs is clear. They interact and extend cooperation to each other yet do not exchange daughters in marriage. They have separate gurdwaras with own managements, but celebrate different gurpurabs collectively at all important gurdwaras in Hyderabad allocated to them.

The state and fate of Sikligar and Banjara Sikhs is worse still. They support flowing beards and kirpans but are given to worst kind of existence. Manna Singh of Mortad has a wayside kulli whose tattered polythene cover has layers of materials on it. The enclosing sheet has big holes. Two cots hold the household baggage. Two hens and a dog are a part of family — his wife, two sons and a daughter-in-law. The case of another Sikligar Surjan Singh at Nizamabad is worse still. His 33 member family lives in a single room. Mortad was the area of operation of Narayan Singh Mortad, a soldier of the Sikh Force who rebelled against the Nizam and started Robbin-Hooding. His camping hillock is named Narayan Singh Pahar. There are stories of his strength and chivalry. The police was scared of him. Finally, he was poisoned through a lady whom he killed and later shot himself, taking a chadar on himself. People narrate that when chadar fluttered, policemen would run away. The dead Mortad was fired upon for an hour before “capture”. The Naxalites have songs on him.

The tribal Banjaras of villages adjoining Nanded are taking to Sikhism. Most kirtani jathas in the Deccan gurdwaras including Takht Sach Khand are theirs. They are groomed in a taksal at gurdwara Banda Ghat, Nanded. It has 80 students and the majority is theirs. Some leave the course midway and become pathis while those who complete make their own kirtani jatha. They are first- generation converts who are happy with their decision.

Dakhani Sikhs are far from affluent. They live in clusters and most of them inhabit slums of the worst kind. Only a few have climbed the ladder of prosperity.