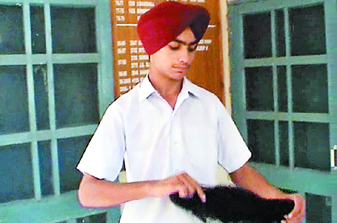 Harjinder Singh, a Class-11 student of Sainik School, showing his hair to media persons on Sunday in Kapurthala. (HT photo)

A Class-11 Sikh student studying in a local Sainik School has alleged that someone cut his hair, while he was sleeping in his hostel on Saturday night.

Harjinder Singh said he found his hair lying aside his bed when he woke up on Sunday morning. “Ten of us are living in a
hall in the Patel House hostel. On Saturday night, we all went to sleep by 11.30. When I woke up at 5, I noticed the act,” he said.

“It is a shameful act. We were informed by the school authorities about the incidence. My son is under depression,” said Arminder Singh Makkar, the father of the victim, who is a resident of Jalandhar.

His mother Manprit Kaur said they should have been informed about the incident immediately.

Deputy superintendent of police (DSP), Kapurthala, Paramjeet Singh and SHO Narinder Sharma reached the spot after getting the information.

“The DSP asked my son to remove the turban to check his claims. The hair were cut very abruptly using scissors,” claimed the father.
Sudhanshu Arya, principal, Sainik School, said he had formed a committee to look into the matter. “The matter has been reported to police by the parents. We will provide full cooperation,” he said.

The police have registered a case and started investigations