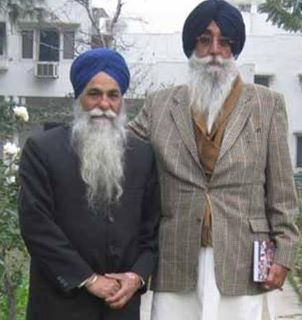 I feel pity on Simranjit Singh Mann who by knowing well, released the books set of fake historian Harjinder Dilgeer.

This Dilgeer and others followers of Darshan lal generally object and refuse to accept the Dasam Granth written by 10th master. We may produce a 1000 evidences but are not acceptable to them because of their superior complexion by having a large number of ignorant Sikhs as their followers/disciples.

Since 2009, when Darshan singh used derogatory words against 10th master since then many new objections are received but when the ask the authenticity of calling this compiled granth which consisits bani of 10th master as Dasam granth.

In a book written by this so-called historian Dilgeer he writes that Guru Gobind singh ji visited Haridwar in 1696 and met there to Madho Das whereas the descendents of Madho das (Banda Bahadar at Riasi) do not accept it like we Sikhs. Madho das never visited Haridwar. You may read a number of websites on him or the books, no reference is available.

When asked the reason of visit and the route map taken by Guru Gobind Singh ji from Anandpur sahib in 1696, he has no answer but quotes a visit of guru ji in a Bahi (book) of a Pandit which could easily be added y any RSS follower to show the importance of Brahmins by Guru ji. But i again ask him why did Guru ji not wrote about his visit to Haridwar ? If he could write about his visit to Paonta sahib then why not on his next visit? Why does the history of Gurudwara Nadhha sahib. Paonta Sahib and Dehradun Arhat Bazar do not show any visit of Guru ji in 1696?

If the Sikhs could build a Gurudwara where Guru ji brushed his teeth (Datun Sahib) and where he slept on ground (Machiwada sahib) then how could they not build a Gurudwara to commemorate his visit to Haridwar where there are a number of Niramala hermitages are present? Why Nirmalas are also do not have any record of his visit? If Haridwar is known in Sikhism because of visit of Guru Nanak then how could Sikhs ignore the visit of Guru Gobind Singh ji?

Would the SGPC?DSGMC take a stern action on distortion of Sikh history and defame 10th Guru ji by connecting his visit to Pandits and marked in his Bahi(which is doubtful) ? It seems an attempt to promote the Brahmin ideology through Rashtriya Sikh Sangat that Guru ji had regard for Brahmins and he visited Haridwar to do Pind dan of his late father (9th Guru) as there could be no other reason of visiting Haridwar and this puppet, the traitor Dilgeer is a tout of RSS hiding in Britain. He seems in dilemma if Britain is safe for this traitor, he forgets that Udham Singh killed General Dyer in Britain.

Our Simranjit Singh Mann also needs evidence of disrespect to Sikh Gurus and distortion of Sikh history by Dilgeer. So if he take note of it and about disrespect, if he wishes i can give him solid evidence—his interview to Harman Radio.