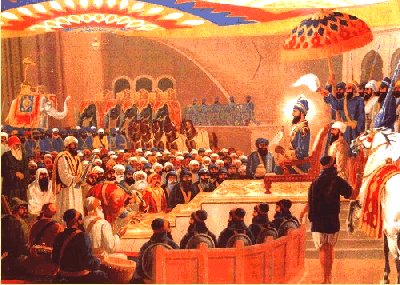 Thousands of devotees gathered inside the premises of Sachkhand Harmandir Sahib in Amritsar on Friday, participating in the procession which was marked by the carrying of the Holy Scripture ‘Guru Granth Sahib’ in a decorated chariot.

A similar procession was taken out in Patna Sahib as devotes turned out in large numbers despite the cold weather.

“Like every year we are taking out a religious procession and chanting prayers to celebrate the birth anniversary of our revered Guru,” said Giani Iqbal Singh, a Sikh leader.

The devotees also chanted numerous prayers while walking along the chariot.

In daredevil acts to depict victory over evil, Sikh martial art forms like the ‘Gatka’ were also performed by trained professionals.