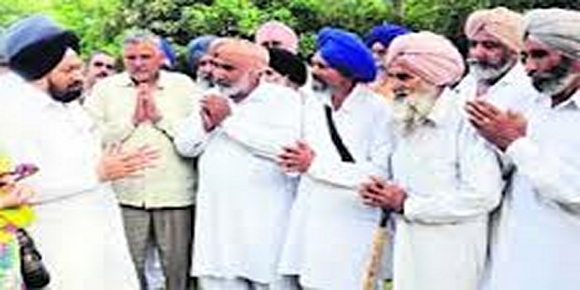 CHANDIGARH: They have created a little Punjab in the arid Kutch region of Gujarat. Now, a number of these Sikhs – who have made Gujarat their home over a period of almost five decades now – are faced with the fear of displacement.

The Gujarat government has put a “freeze” on the land-holdings of hundreds of farmers by invoking the Bombay Tenancy and Agricultural Lands Act, 1958, disabling the Punjab agriculturists from selling, buying or taking any loan or subsidy on their land.

“After working hard for so many years, we turned the barren land of Kutch into an oasis and now the Gujarat government wants us to go,” Surender Singh, 61, said here on Tuesday. “We are being treated by the Gujarat government as if we don’t belong there. It’s almost the same way as Biharis are being treated in Maharashtra,” added Singh, who originally belongs to Fazilka district of Punjab and is now a cotton farmer in Kutch.

A group of farmers from Kutch have met Punjab chief minister Parkash Singh Badal and asked him to intervene in the matter.

Punjabi farmers began settling in Kutch, along the border, after the India-Pakistan war of 1965 on the insistence of then Prime Minister Lal Bahadur Shastri, who had felt that courageous men were needed close to the international border.

“The Gujarat high court has already given a decision in our favour, but the Gujarat government has moved the Supreme Court. We are poor farmers and can’t afford high fees required to fight the case in the apex court,” said Prithavi Singh, 43, who originally belongs to a village in Sangrur district of Punjab.

Gujarat government has already put a freeze on over 20,000 acres of land already affecting thousands of farmers. “I sold off all my land in Mansa and moved to Kutch in the early 80’s. If I am ousted in Gujarat, I’ll have nowhere to go,” said Dalip Singh, 70.

Not only those from Punjab, a number of farmers from Haryana have also been migrating to Kutch lately and investing in land there. “Land rates are still cheap in Gujarat. Even now one can buy an acre of land for just Rs 3 to 4 lakh which in Haryana and Punjab would cost over Rs 1 crore,” said Satpal Gosain, who hails from Hisar district in Haryana.

Shiromani Akali Dal spokesperson Balwant Singh Ramoowalia said that Punjab government would get in touch with Gujarat over the issue. “The issue will be taken up with Gujarat chief minister Narendra Modi and BJP high command in Delhi,” he said.

Source: The Times of India