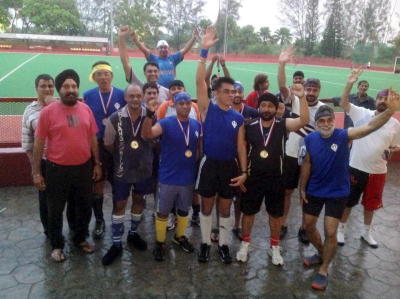 Sikhs get together in a display of gamesmanship at annual event

Malacca, Malaysia: Festive homecoming is a time to re-connect with family and good friends, celebrate shared experiences, share traditions and enjoy periods of leisure and getting away from it all.

For the local minority Sikh community, the return of their sons and daughters from outstation and Singapore for Deepavalienabled them to participate in the annual Diwali Cup netball and hockey challenge series.

The challenge provided much re-bonding and renewal of friendship and true sportsmanship among young singles (unmarried women and bachelors) up against the community senior and married stalwarts, many of whom have donned state and club colours in their younger days.

For 58 year old Harban Singh, returning home from Kuala Lumpur and reuniting with his 43-strong extended family members, their spouses and children evoked pleasant memories of their childhood days in Ayer Leleh.

Harban and brother Inderjeet, who donned state hockey colours in the 70’s, still strongly boasts “We have enough depth within our families to form two strong football teams complete with officials and referees. Sports and games were part and parcel of our lives from our schooldays onward until the present time. Coming back home for the annual Diwali Cup challenge series is something we all looked forward to.”

As for the Diwali Cup challenge, the rainy weather did little to dampen the spirit of both players and the community members who lent much vocal support and cheers.

In netball, the young singles and the unmarried members of the fairer sex went through much opposition before snatching a close 11-9 win over their married counterparts. It was a close affair at men’s hockey as well with the senior and married side battling to a 2-2 draw with the bachelors in regulation time.

Inderjeet Singh was the toast with a brace for the senior side while Mikesh Rush and Harpeet Singh replied for the bachelors. In the resulting penalty flicks, the married men notched a 3-1 win to win the cup. Thus, the overall Diwali Cup challenge series saw a joint champions status declared.

Prior to the medals presentation ceremony officiated by Manmeet Kaur, the vice president of the Malacca Sikhs Cultural and Sports Club (MSCSC), a minute silence was observed as tribute to 51 year old former international Balbir Singh. Noted for his playing, promotion and development of hockey within the local community, Balbir passed away suddenly on the field in April this year while representing MSCSC in the annual Vasakhi Cup inter state tournament in Singapore.