Amritsar,punjab:On Tuesday, Sikhs celebrate the birthday of their fourth guru, the man credited with founding the city of Amritsar and starting construction of the Golden Temple complex, which houses the religion’s most holy shrine.

Guru Ramdas was born in Lahore as Bhai Jetha, on – according to the Gregorian calendar – Oct. 9, 1534. He went on to establish Ramdaspur, now known as Amritsar, which has become the holiest city for Sikhs.

He is said to have overseen the excavation of the sacred pool that today surrounds the city’s glistening temple and whose waters are believed to have healing properties. The building appears to float above the water – the Amrit-sar, meaning pool of nectar.

Sardar Dalmegh Singh, secretary of the Shiromani Gurdwara Parbandhak Committee, the highest Sikh authority, says the anniversary of Guru Ramdas’s birth is one of the most important days in the Sikh calendar.

Guru Ramdas was succeeded by his third son Arjan Dev, who became the fifth Guru in 1581 and oversaw the construction of the golden shrine in the middle of the temple complex.

Amarjit Singh, chairman of the Gurudwara Sis Ganj Sahib in Chandni Chowk in Old Delhi, said the temple at the heart of Amritsar “is like the Mecca of the Sikh people.”

The Golden Temple was the site of Operation Blue Star in 1984, when Indian security forces fought with armed Sikh militants. Hundreds of people died in the event, which led to the assassination of then Prime Minister Indira Gandhi by her Sikh bodyguards, which in turn prompted deadly riots.

A shrine to commemorate the people who died during Operation Blue Star is being erected at the Golden Temple site. But there is a dispute over whether the memorial should honor those killed on both sides of the encounter.

Just over a week ago, the leader of the security forces in the operation, Lieutenant General Kuldeep Singh Brar, was attacked by a group of men in central London. On Monday, Barjinder Singh Sangha and Mandeep Singh Sandhu were charged with wounding with intent to do grievous bodily harm to the retired officer.

It’s been a difficult few months for the Sikh community worldwide. In August, a man shot dead six people at the Oak Creek gurudwara (temple) in the U.S. state of Wisconsin. The gunman, Wade Michael Page, a former soldier in the U.S. Army, also died.

Indian Prime Minister Manmohan Singh, himself a Sikh, condemned the attack as a “senseless act of violence” and conveyed condolences to the victims’ families.

Tuesday, Sikhs will be concentrating on celebrating the birth of the man who gave their religion a spiritual home.

In Delhi celebrations began at 2am and will continue throughout the day, with religious songs, prayers and free food, Amarjit Singh said.

The Golden Temple complex is renowned for its large Langar hall, where free food is served throughout the day to pilgrims and tourists.

“There are many lessons of Guru Ramdas,” Mr. Singh said. “He gave the message of work for the poor and needy people.”

A religious procession to mark the fourth Guru’s birthday will take place today in Amritsar and there will be a firework display this evening. 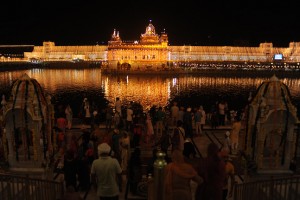 Previous: The vilification of Sikhs
Next: Sikh school proposals attracting ‘lot of enthusiasm’