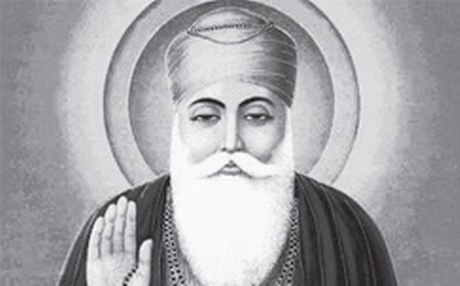 A large number of devotees across Punjab, Haryana and Chandigarh thronged gurdwaras from early in the morning on Wednesday, to pay obeisance on the occasion of Gurpurab, the birth anniversary of the first Sikh Guru, Guru Nanak Dev.

Braving early morning chill, devotees made a beeline at the Golden Temple in Amritsar, Talwandi Sabo, Anandpur Sahib and other gurdwaras in Punjab, including those in Ludhiana, Jalandhar, Patiala, Pathankot, Mohali and Ropar.

At Harmandar Sahab in Amritsar, popularly known as the Golden Temple, which has been tastefully illuminated, devotees had been pouring in since Tuesday night.

In Chandigarh, people paid obeisance at the Gurdwaras. There was heavy rush of devotees at the Sector 34 Gurdwara. Gurpurab was celebrated across Haryana as well, including in Ambala, Kurukshetra, Karnal, Sirsa, Faridabad, Gurgaon and Fatehabad.

Community kitchens or ‘Langars’ were organised at all gurdwaras across the two states and Chandigarh. Nagar Kirtans or religious processions were taken out by the Sikh community yesterday at most places in the region. Tight security arrangements had been made at the famous gurdwaras in the region.

A Sikh Jatha had left for Pakistan two days back to offer prayers at the Nankana Sahib Gurdwara. Meanwhile, thousands of devotees paid obeisance at Gurdwara Ber Sahib at Sultanpurlodhi in Kapurthala district where Guru Nanak Dev had spent 14 years of his early life. Long queues of devotees could be seen at the gurdwara.

The devotees took a holy dip at a Sarovar near Ber Sahib and holy Bein and listened to Gurbani. Parkash Purb (birth anniversary) of the founder of Sikh faith, was also celebrated in Phagwara with full religious fervour.

A massive procession was carried out by members of the Sikh community on Tuesday on the eve of 544th birth anniversary of Guru Nanak Dev, the founder of Sikhism.

The ‘Nagar Kirtan’ or the religious procession, organized by the Shiromani Gurdwara Parbandhak Committee (SGPC), passed through various streets of the city before concluding at the famous Golden Temple where the Ardas (prayers) were performed.

More than 20,000 students, teachers and staff from various institutions under the Khalsa College Governing Council (KCGC) participated in the procession chanting the ‘Gurbani Shabads’.

The major attraction during the march was the performance of ‘Gatka’ or the Sikh martial art by the college students.

Bystanders also got to witness showering of rose-petals from a helicopter, a first-time novelty in the history of the Nagar Kirtan which has been held every year since 1912.

On the occasion of the Guru Nanak’s birth anniversary on Wednesday, thousands of devotees are expected to pay obeisance in the sanctum sanctorum of Harmandir Sahib or the Golden Temple. The langar or the community kitchen at the Sikh shrine has made elaborate arrangements to feed more than four lakh devotees.

Heavy security arrangements have also been made on the periphery of the Golden Temple to prevent any untoward incidents.

The Prakash Utsav of Guru Nanak (birthday celebrations), first Sikh Guru and founder of Sikh religion will be celebrated today.

In this regard, Vishaal Deewan (a mass congregation) will be held at NTR Stadium, near Indira Park from 11 am to 4 pm on Wednesday in which Sikh devotees from various parts of the state are expected to converge at the congregation.

The event will be marked by recitations of Gurbani Keertans by reputed Ragi Jathas (religious preachers) who have been invited from various parts of the country to render gurubani keertans.

Bhai Dalbir Singh of Sri Harmandir Sahibji (Golden Temple, Amritsar), Bhai Onkar Singhji of Una Saheb wale (Punjab), Bhai Jaswinder Singhji, Bhai Hari Singh and others will recite shabad keertans and Kathas and throw light on the teachings of Sikh Gurus. After the culmination of the congregation Guru-ka-langar (free community kitchen) will be served to the devotees.

A Night, a Kirtan Darbar will be held at Gurudwara Saheb Secunderabad, from 9 pm to 2.30 am in which Ragi Jathas will rendered Gurbani keertans.

The 543rd anniversary of the founder of Sikh religion Guru Nanak Dev Ji is being celebrated on Wednesday with great religious fervour, dedication and devotion across the country.

President Mukherjee in his message said ‘the life and teachings ofGuru Nanak Devji are of profound significance to mankind’.

“His message of love, harmony and brotherhood, his universal vision and compassion provide inspiration for all humanity,” said President Mukherjee in his message.

“May each one of us imbibe his ideals and endeavour to apply his noble teachings in our daily lives. On the sacred occasion of the birth anniversary of Guru Nanak Devji, I extend my greetings to all my fellow citizens,” he added.

Vice President Ansari in his message said that ‘Guru Nanak Dev Ji, the founder of Sikhism, showed us the path of peace, harmony and righteousness’.

“I convey my greetings and good wishes to the people of our country on the auspicious occasion of Guru Nanak’s Birthday. Guru Nanak Dev Ji, the founder of Sikhism, showed us the path of peace, harmony and righteousness. His message of devotion to God, excellence of conduct and tolerance has timeless relevance and can help in transforming our society,” said Vice President Ansari.

“Guru Nanak Dev Ji’s Birthday offer us the opportunity to derive inspiration from his life and deeds by creating a just, peaceful and harmonious society,” he added.

The Prime Minister in his message said Guru Nanak Dev’s teachings of religious harmony and peace still inspire everyone.

“Guru Nanak Dev’s life and message gives us the strength to face the challenges faced by our society even today,” said Dr. Singh.

Guru Nanak was born in Nankana Saheb on this day in 1469.

Thousands of people lined the streets yesterday to celebrate the birthday of the founder of the Sikh religion.

Brightly-decorated floats led a parade of up to 15,000 worshippers from the Guru Tegh Bahadar Gurdwara, in East Park Road, Leicester, to the Guru Nanak Gurdwara at Holy Bones, near St Nicholas Circle.

The Nagar Kirtan event, which has been staged in Leicester for more than 20 years, marks the birthday of the first Guru Nanak Dev Ji.

For Harbhajan Singh, 70, from Rowley Fields, it was a very important day.

“It is like Christmas day for us,” he said. “There is lots of singing and praying all over the world.”

The celebration began with prayers and hymns at the Guru Tegh Bahadar Gurdwara, before the procession took three hours to snake its way through the city.

Food stalls lined the route, pumping out songs to the passing crowds.

Manjit Kaur from the Narborough Road area attended the temple with her 10-year-old son, Vikram.

“I think like all celebrations, it has become more commercialised and has become more about coming together and being with family,” the 37-year-old said. “But still, it is a very important day because it is the celebration of the first Guru’s birthday.”

Vikram said: “I think my favourite part is the food.”

Worshippers carried on the celebrations with more prayers and food at the Guru Nanak Gurdwara.

Grace and Sharanpal Singh from Braunstone Town, were there with one-year-old daughter Heer.

“We will have prayers in the gurdwara and a community meal together.”

Wife Grace, 27, said: “It is the one day where you get to see all the people from the community together.”

Kabeer Singh, 28, from Oadby, was there with friends, carrying flags as part of the parade.

Nagar Kirtan is the second of two religious processions by members of the Sikh community in Leicester every year.

The first is Vaisakhi, the religion’s new year, in April. Source: Thisisleicestershire.co.uk

It was a festive day for many communities on Wednesday as Guru Nanak Jayanti and Dev Diwali were observed. While Punjabis and Sindhis visited gurudwaras to attend kirtans and kathas, Jains marked the day as ‘Chaatur maas parivartan’.

Hundreds of devotees dressed in colourful Punjabi attire visited gurudwaras from early morning as kirtans in praise of Guru Nanak began at 4 am marking the birth anniversary of the first Sikh Guru. The chairman of Gurudwara Gobind Dham of Thaltej, Surjit Singh Bagga, said around 300 kg of sheera (kadha prasad) was prepared for devotees.

Dev Diwali was celebrated with much joy and enthusiasm in the city with fireworks and sweets. Most of the temples of the city displayed a wide array of sweets, fruits, farsaan (snacks), daal (grains), and other food items in front of the Lord for the entire day as ‘Annakoot’.

Devotees in large numbers thronged temples for darshan of the Lord and to see the grand display. While the Bhadrakali temple had arranged for a range of 64 items, similar grand arrangements were made by major temples like Camp Hanuman temple, Parmeshwar temple, Satellite and others.

The havelis of the city too celebrated the day in a grand way. “The celebration here was like the marriage of the Lord where devotees in large numbers were present and we had a special darshan,” said one of the devotees of Vrajdham haveli in Satellite.

The Jains on Wednesday observed ‘Chaatur maas parivartan’ where the Jain maharajs change their position or place of shelter. With a music band and much ceremony, Jain devotees started celebration from 7 am as the Jain maharajs started walking to their next destination. Also, the Jain maharajs delivered a religious discourse to a keen audience on the principles of Lord Adinath. Source:Dna India.com 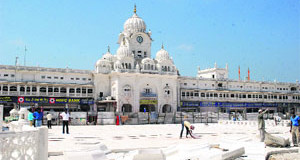 Golden Temple plaza to be thrown open to devotees soon 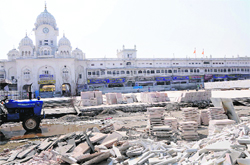