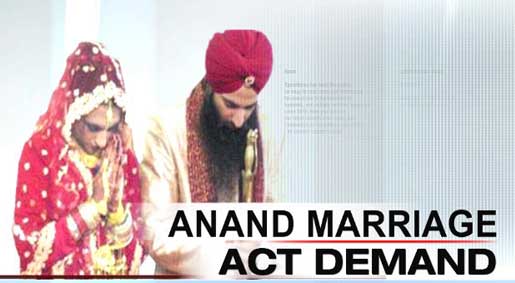 Sikhs, Buddhists and Jains forced to declare themselves as Hindus may get relief

Delhi, India: The Union Cabinet is likely to consider a proposal that seeks to do away with the requirement to disclose one’s religious affiliation for registration of marriages as well as the demand of Sikh bodies that their marriages be registered under a separate law.

The move has been prompted by the consideration to help those opting for inter-faith marriages, along with the need to make registration of marriages a simpler affair.

It is recognized that those who marry outside their religion face harassment, including from the conservative sections of the bureaucracy.

Administrative convenience is the other consideration, with the law ministry suggesting that registration of marriages will become easier if a clause on marriage registration is added to the Births and Deaths Registration Act, 1969.

In its note to the Cabinet, the ministry has argued that since infrastructure to register births and deaths is already in place in civic authorities, it can easily handle registration of marriages once the law has been suitably amended.

As for the demand of Sikh bodies, they have argued that their marriages should be, as is the case with other minority communities – Muslims, Christians, Jews, Parsis – registered under a separate law. Marriages of Sikhs along with those of Buddhists and Jains are currently registered under the Hindu Marriage Act: an arrangement which is being opposed by many Sikhs as part of their pursuit for a distinct identity. These groups argue that their demand can be accepted by amending the Anand Marriage Act, 1909.

The Cabinet will be required to factor in view that meeting the demand will spark similar pitches from Jains and Buddhists: two other communities that have so far been comfortable with the practice, where their marriages are registered under the Hindu Marriage Act.