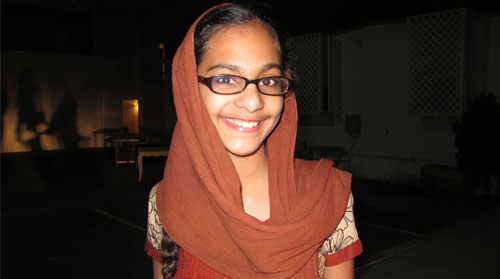 FREMONT, Calif. – Manat Kaur is in many ways a typical 14-year-old, indistinguishable from others her age in her usual outfit of sneakers, jeans and T-shirt. But when asked, the soon-to-be high school freshman makes it a point never to hide her Sikh identity.

“Why should I? I am proud of it,” Kaur asserted, as she sat on an outdoor bench at her local Sikh temple, or gurudwara, last week, her head covered with a scarf. Few days earlier, on August 5, Wade Michael Page, a white supremacist, walked into a Sikh temple in Oak Creek, a suburban community of Milwaukee, and randomly fired at the congregation. Six people died in the shootings and three were critically injured.

Page himself died in the rampage, reportedly from self-inflicted gunshot wounds.

The shootings reverberated from the small community of Oak Creek to the rest of the nation and beyond, including India. Rajwant Singh, chairman of the Washington, D.C.-based Sikh Council on Religion and Education described the killings as “hitting the core of the community.”

In fact, Sikhs in the United States have been far too frequently targeted post 9/11, when hundreds became victims of hate crimes they say were driven by individuals mistaking them for Muslims, blamed for the 9/11 attacks that claimed upwards of 2,700 lives.

But like Manat, other youth say that while Wisconsin has once again shattered their sense of security, it has made them more determined than ever to educate the mainstream community about who they are. They say the Wisconsin tragedy, like 9/11, has become a teachable moment for them.

Simran Kaur, 32, of the national Sikh advocacy group, The Sikh Coalition, said that following 9/11, her group, as well as other Sikh organizations, fielded “thousands” of complaints from Sikh parents about their children being bullied in school. That, in turn, galvanized Sikh advocacy groups like hers to launch programs to educate students and teachers about what Sikhism is all about, she said. Her group itself has trained a number of “facilitators” to go to Bay Area schools in and around Fremont and talk about Sikhism.

Additionally, over the last decade, the coalition has published a number of books about the religion and its history, and the community is trying to get schools nationwide to include in their curriculum courses on Sikhism.

“We don’t want to appear as an a-historical entity on the American landscape,” said Amandeep Singh, 29, a council member of the Sikh Student Federation.

Founded in India in the 15th century, the monotheistic religion has around 26 million followers worldwide, including around 300,000 in the United States to which they began migrating in the 19th century. As farmers, cab drivers and professionals, they have long contributed to the U.S. economy.

Baptized Sikhs are required to wear their five articles of faith – unshorn hair, a comb, a steel bangle, a sword and a special type of under garment. They are also required to cover their hair with a turban.

In the days following 9/11, Sikhs in the United States became targets of hate crimes. In fact, just a day after the attacks, a Sikh gas station owner in Mesa, Ariz., was shot to death. The gunman, Frank Roque, shouted, ”I stand for America all the way,” as he fired his gun.

That, and other killings and threats against Sikhs, resulted in the formation of at least two U.S.-based Sikh advocacy groups, The Sikh Coalition and the Sikh American Legal Defense and Education Fund (SALDEF).

“After 9/11, I used to wake up every morning and feel I could be caught wearing my articles of faith,” said Fremont-born Harjot Singh Sandhu, 24, an undergraduate student at U.C. Berkeley.

Following that attack, a few Sikh men shaved off their beards and discarded their turbans in order to look less conspicuous.

“But those were Sikhs already sitting on the fence, who were already thinking of shedding their identity,” asserted Manjit Singh, a SALDEF board member.

This time, though, most Sikhs, especially younger ones, are interpreting the Wisconsin killings in a “rational way, using the incident as an opportunity to empower themselves,” Singh observed.

Indeed, as 23-year-old Ragini Momi, a junior in the cinema department at San Francisco State put it: “It could happen to any community,” she said, noting: “It has brought us closer together, and because of that we feel stronger.”

And, she added: “It gives me more strength to let people know all about us.”

And at least one youngster, moved by the outpouring of support from members of the non-Sikh community, said that if a tragedy like Wisconsin were to happen in any other community in the United States, she would be there for them.

“I would show my support,” asserted Sukirat Kaur, 18, at a vigil on the shores of Lake Elizabeth in Fremont, “without any hesitation.”