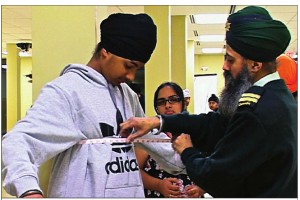 But the Sikh community can claim it as their own Regiment as all of the 40 youngsters who have signed up so far to become cadets are young Sikh-Canadians, who signed up at two information sessions held on Nov 22 and this past Thursday evening at the premises of the Sikh Academy in Surrey.

Surrey,Canada:– While erroneous information in the media – a story in the Sikh supplement celebrating Sikhism’s founder Guru Nanak’s birthday – indicated that a Cadet Corp, which has singular purpose of training youth to be better, responsible members of Canadian society, was strictly a Sikh community corp and had formed some kind of a “military alliance” between the Canadian armed forces and the Sikh community – which is completely untrue. No such military alliance has been formed!

But the Sikh community can claim it as their own Regiment as all of the 40 youngsters who have signed up so far to become cadets are young Sikh-Canadians, who signed up at two information sessions held on Nov 22 and this past Thursday evening at the premises of the Sikh Academy in Surrey.

As well, the sponsorship committee, which is headed by prominent physician Dr. Pargar Bhurji and co-chaired by Suki Pangalia, a Commissioned Officer of the Canadian Armed Forces and himself a former cadet, is also made up mostly of Sikh-Canadians. The main sponsor of the 3300 BC Regiment RCACC is the Friends’ of the Sikh Cadet Society, which will help raise funds along with the sponsorship committee for the cadet training program.

The 3300 BC Regiment RCACC, which will in the future have an name that reflects its specific identity, was officially launched on Nov 28, the birth anniversary of the Sikhs; 1st Guru Nanak Devji.

The sponsorship committee requires local community support to meet its obligations that include accommodations, training aids and equipment and program enhancements not otherwise provided by the Canadian military.

Bhurji, Pangalia and the sponsorship committee members of 3300 BC Regiment RCACC, which will manage the operations of the new cadet unit, are currently busy raising funds to meet the financial obligations of the unit, which will kick off training under the supervision of Major Jim Blomme in January 2013.

The committee will be led by chair Dr Bhurji and vice-chaired by Suki Pangalia.

“I take pride and honour to let the community know that 3300 Cadet Corp will be now ready to open to our children both male and Females age 12 to 18 with an Open House on the auspicious day of Birth of Shri Guru Nanak Dev ji.,” said Dr. Bhurji.

“I take pride in helping youth as it has been my lifelong calling,” said Pangalia, who is a child and youth counsellor in Surrey and the former CEO of the Rangeela Dance School.
The sponsoring committee will work closely with Major Blomme, who will be the commanding officer of the 3300 BC Regiment RCACC.

“I am excited about the launch of 3300 RCACC,” said Blomme. “I encourage the community to take full advantage of the self-discipline, leadership and team work skills the program has to offer the youth of your community.”

Roger W. Prouse, Vice President of the Army Cadet League of Canada (BC), congratulated the sponsors and the sponsoring committee on the official launch of 3300 BC Regiment RCACC.
“This is a tremendous day for the cadet league and the people of Surrey,” Prouse said.

“This is a milestone day for all of us,” said Harbinder Singh Sewak, chairman and founder of the Friends’ of the Sikh Cadet Society, who has been instrumental along with other sponsoring committee members to get the new cadet corp up and running.

The Department of National Defence provides leadership in the form of training and funds for the Cadet program with the support of the Sponsoring committee made up of parents and other members of the community. They will also work together to come up with an official name for the unit which better reflects the patronage of 3300 BC Regiment RCACC.

New Cadet Corp Not Strictly For Sikh Kids Or Community But Open To All!