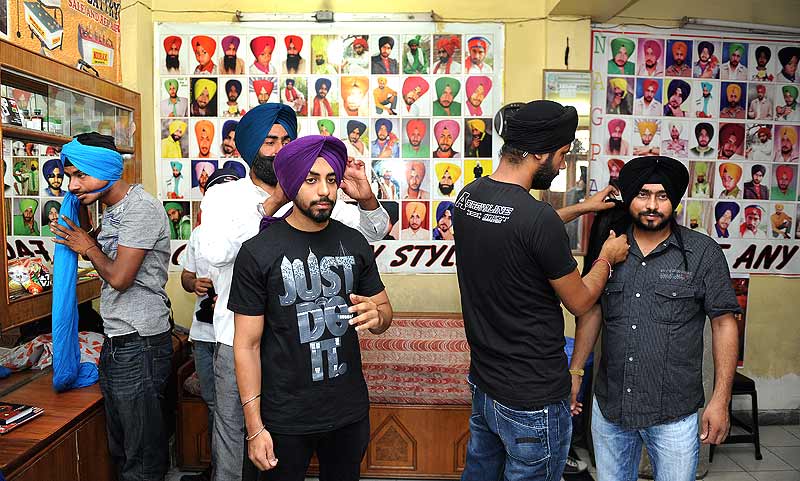 Whoever would have thought that there’ll come a day in Punjab when young Sikh men would need turban-tying academies to learn how to tie a decent turban. That Taranjit Singh, a finance consultant in Jalandhar, would have to visit a commercial turban-tying centre in his neighbourhood each morning before he goes to office. Or that 19-year-old Maninderjit Singh, who cut his hair a few years ago to please a former flame, would require a dastar-tying camp at the village gurudwara to learn how to tie a turban on his shaved locks—to please the present one.

It’s a somnolent summer afternoon at Boolpur village, some 20 km away from Kapurthala. A throng of boys of different ages collects at the gurudwara to participate in a dastar camp organised by Kapurthala’s Dastar Academy. Run by Manpreet Singh, a bank manager, and his friends Gurpal and Sukhjinder, the academy is hard pressed to meet a calendar full of dastar-tying camps they’ve been invited to hold in the countryside.“We’re also being invited by Sikhs from other parts of the country like those in Raipur, Tehri and even Dehradun,” says Manpreet.

Today, thousands of young Sikh men (some 80 per cent, claim informal estimates) have never had a turban-tying ceremony: the rite of passage for 12-year-old boys in which the boy’s maternal uncle ties a turban on his head for the first time followed by an ‘akhand path’, a ritual recitation of the Guru Granth Sahib. They cut off their hair because it got too irksome to maintain. Some did it to follow prevailing TV trends, others, just because their friends were doing it. Result: Punjab now has more shorn Sikhs. The turban, the most visible symbol of a Sikh’s identity, has followed suit, because with the locks shorn, there is no need for one.

But once a Sikh, always one (though a shorn Sikh is considered an apostate). He still wants to wear the turban ever so often, particularly on special occasions. As the younger generation had lost the art of tying the turban—usually passed down from father to son—some concerned Sikhs have taken it upon themselves to popularise the headgear again. For some, the motives are purely altruistic: to make fellow Sikhs aware of their vanishing identity. More enterprising Sikhs, like Jaura Nagpal of the Jaura Dastar Academy in Jalandhar, saw in the demand for turban-tying expertise a business opportunity. Says Nagpal, “If you want to make an impression in Punjab, you still have to wear a smart turban. Be it to impress a would-be spouse, at weddings, or even for a job interview.” Besides the turban-tying courses, Nagpal and his partners spend the better part of their days tying turbans on the steady stream of customers who patronise his outfit. He charges Rs 20-50 for a turban and offers monthly discount packages of Rs 600 for the popular ‘pochvin dastar’ which has five or seven ‘pech’ (pleats).

But the credit for reigniting some interest in long locks goes to the Amritsar-based Akal Purakh ki Fauj, which started a ‘Turban Pride’ movement six years ago. “It was a time when young Sikhs were heading towards apostasy in a big way and it was evident that if something drastic wasn’t done to arrest the trend, we’d lose our identity,” says Jaswinder Singh an advocate and the brains behind the organisation’s campaigns. He began by holding dastar-tying competitions, then opened dastar clinics to teach turban-tying and now hosts the extremely popular Mr Singh International personality contest, which is open only to unshorn young Sikh men from across the world.

Ironically, the management of the Shiromani Gurudwara Prabandhak Committee, which oversees the gurudwaras in north India, has only now realised the need and demand for dastar clinics. It has recently started classes on a terrace in the Golden Temple complex. A room fitted with wall-to-wall mirrors is still being readied. This, when big towns like Ludhiana or Jalandhar already have almost a dozen or more such academies.

Manpreet and his team organise an annual ‘dastar march’ in Kapurthala that is attended by former and present students and Jaswinder Singh’s turban pride movement is a buzzword among young Sikhs keen to make it big in media and entertainment. “The Mr Singh International contest, which is probably the most successful part of our movement, has become a stepping stone for Sikh boys entering the entertainment business. Our aim is to convince them that wearing a turban and taking pride in their Sikh identity can be a unique qualification for them,” Jaswinder Singh tells Outlook. Counting off the names of Mr Singh contest winners who have made it big in the entertainment industry, he says that of late popular Punjabi singers too have begun singing songs in praise of the dastar, which they find handy during the contest’s catwalks. The Fauj’s website has a software called ‘smart turban’ with which a person can upload his picture and plant a selection of turbans on it, to see which one would suit him the most.

Jitender Singh (Jeetu), a newsreader with a UK Punjabi news channel, meets us in an Amritsar hotel in a smartly tied seven pech dastar. Jeetu says, “I owe my career to my dastar. I won the Mr Singh contest in 2007 and have since acted in television serials, modelled in a hundred-odd shows and also acted in one feature film. If I’d cut my hair even by mistake, my career would have collapsed.” But has the craze for a smart turban helped turn the tide of lock-shearing among the Sikh youth? Harnek Singh, a volunteer at the Boolpur camp, says, “I cut my hair a few years ago because I didn’t know how to tie the dastar. I then came upon a camp like this and learnt how to tie a proper one. Since then, I have been growing my hair again.” But for every Harnek, there is a Sikh sporting the latest Jazzy B hairstyle: a funky pattern etched on a close crew cut. He cannot be bothered with tying a tedious turban like his father did.

It’s said that whatever Punjabis do, they overdo. Those worrying about the Sikhs’ loss of identity are hoping that this happens. That desire for a ‘pochvin dastar’ ushers in a trend back to long hair.