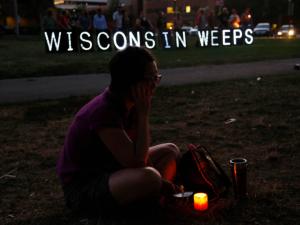 File photo – A woman sits with a candle during a vigil for the victims of the Sikh Temple of Wisconsin shooting, in Milwaukee.

Teresa Carlson, special-agent-in-charge of the FBI’s Milwaukee office, issued a four-paragraph statement saying the agency had concluded its investigation into the August 5 incident and found no evidence to suggest shooter Wade Michael Page had any help or was carrying out any directive from any white-supremacist group. Investigators also found nothing to suggest the attack was part of any ongoing threat to the Sikh community.

The statement did not mention any motive, and the bureau didn’t release any supporting or supplemental documents. Carlson has said previously investigators may never know what drove Page.

“We did not talk about motive because of the fact it went with him,” Milwaukee FBI spokesman Leonard Peace said in an interview. “That may never be known.”

One of the victims was temple President Satwant Singh Kaleka. His son, Pardeep Kaleka, said he found the randomness of the crime frightening.

Page, a 40-year-old Army veteran, walked into the temple in Oak Creek shortly before Sunday services were set to begin and opened fire. He killed six people and wounded three. He also wounded the first police officer to respond to the scene.

The second officer to arrive got into a firefight with Page in the temple parking lot. The officer wounded Page, who fell to the ground and shot himself in the head before he could be captured.

The shootings reverberated around the globe. The Sikh faith has roughly 27 million followers worldwide, with the vast majority living in India.

S.M Krishna, India’s external affairs minister, Nirupama Rao, the country’s ambassador to the United States, and Dutta Toma, counsel general of India in Chicago, visited the temple as well, reassuring worshippers that the Indian government and its people supported them.

“We join the Sikh community in grieving the loss of their loved ones,” Carlson said in the FBI statement. “We continue to work with temple leaders and all of our law enforcement partners in an effort to keep the community safe.” – Sapa-AP