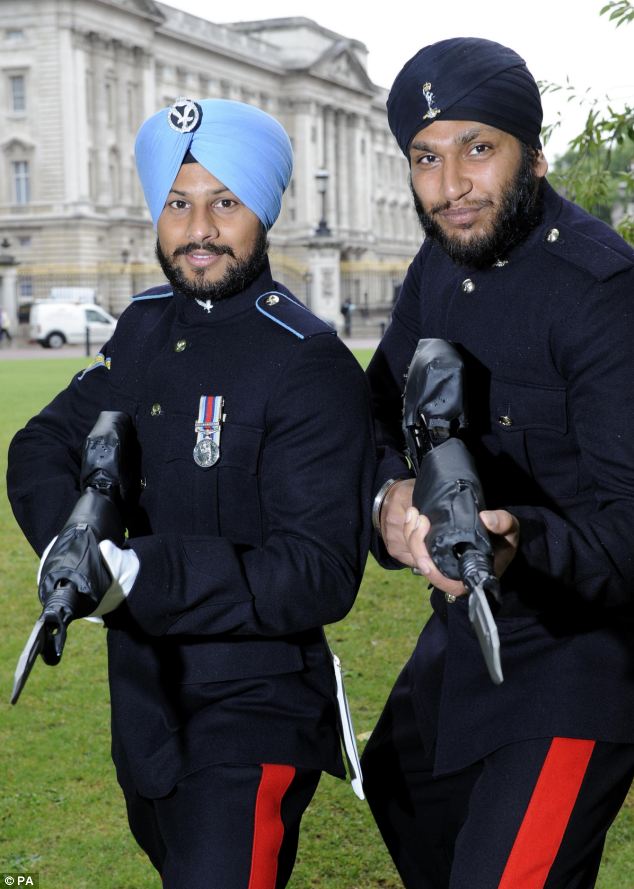 UK: The British Army is embroiled in a damaging row after the first Sikh soldier allowed to wear a turban rather than a bearskin on ceremonial duties suffered abuse from his colleagues.

Guardsman Jatinderpal Singh Bhullar, 25, who joined the Scots guards this year, has been given permission to wear a turban outside Buckingham Palace, breaking hundreds of years of tradition.

The decision by Army bosses has proved controversial with Bhullar’s fellow soldiers. The Army’s Sikh chaplian has told The Mail on Sunday that Bhullar has endured taunts about his turban and his refusal to cut his hair and his beard.

Bhullar is based at Wellington Barracks in Birdcage Walk. The base is used by soldiers from the Scots Guards’ F Compan, who at present are responsible for public duties and guarding the Queen.

According to military sources, Bhullar, who is from Birmingha, is expected to parade for the first time next week. When he marches with his colleagues he will become the first guardsman not wear a bearskin.

Traditionalists in the Scots Guard say the allowances made for Bhullar will make the whole company look ridiculous to tourists and onlookers. The regiment traces its origins back to 1642 and its soldiers have worn bearskins on parade since 1832.

The Mail on Sunday was initially approached by serving non-commissioned officers based at Wellington Barracks, who were angry that the MoD had compromised centuries of history for the sake of one soldier.

The argument presented by Bhullar’s colleagues was backed by senior members of the Scots Guards’ regimental association. Unlike serving personnel, these retired officers are allowed to speak publicly.

David Cuthill, chairman of the Dundee branch, said today: ‘It should be regiment first and religion second. A guardsman is not a guardsman if he’s not wearing his bearskin.

‘Hundreds of years of tradition should be protected. I appreciate his predicament, but if all the other guardsmen are in bearskins and he is in a turban, it is going to look ridiculous.’

As a devout Sikh, it is mandatory for Bhullar to wear a turban. It is intended to protect his hair, when he never cuts, and to keep it clean.

For centuries, Skihs have worn turbans in battle and fought as part of the British Army – including Bhullar’s grandfather, who served in the Second World War. Bhullar’s father has spoken of his pride and condemned the bullies.

Surinder Bhullar, 47, from Slough, Berkshire, said: ‘He deserves respect and he will stay strong. That includes wearing his turban instead of a bearskin, no matter what other soldiers say. He is observing his religion.’

Bhullar was a bricklayer before joining the Army. His first choice was The Parachute Regiment and in and online video he declared his ambition to be the first Sikh Para.

But he dropped out of airborne training and joined the Scots Guards. He passed out last month. Bhullar has confided in chaplain Mandeep Kaur. She said: ‘He had problems telling (his colleagues) why he has to wear the turban and why it means so much to him.

‘It was ignorance and verbals but he did not call it bullying.

‘He was determined to come through everything to explain his religion, the significance of the turban and why it is more important to him than a bearskin.

A Ministry of Defence spokeswoman said: ‘The Army takes great pride in its diversity. Discussions are underway between this unit, the Sikh community and the MoD. The individual will have the full support of the Army and his colleagues. 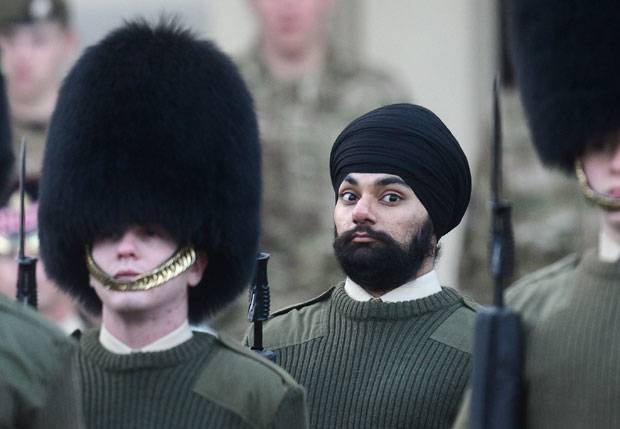