U.S.A:PLANS for a Sikh free school in Derby are a “very good idea”, it was claimed last night.

The proposed Derby Sikh Academy would build on the existing Sunday Punjabi school, which attracts up to 200 pupils at the Singh Sabha Gurdwara temple in Princes Street.

The new school, serving a Sikh population of 8,000, would be one of only three similar free schools in the country if it goes ahead and opens in September 2014.

Last night, locals had their first opportunity to find out more about the school and ask questions at a consultation event held at Sinfin Library.

Sucha Singh Atwal, of Littleover, said he thought it was a positive move. He said: “It is a very good idea. Other faiths, like Muslims, have their own schools, so it would be really god to see a Sikh school in Derby.”

Half of the school’s population would be Sikh children, with the other half made up of children from mixed faiths.

Pupils would attend the school for free and the money which would have been provided for them at other schools would go to the Sikh school instead. Funds would be made available to the school by the Government to carry out building work.

Dr Daljit Singh Virk, head of education at the temple, said public reaction had been positive so far.

He said: “There is a lot of enthusiasm for the school. There has been a packed room here and people have had a lot of questions.

“There is no exclusion in the school and we think it will show how strong the Sikh community in Derby is by running the school.

“People have not put objections down; they have come here tonight and wanted only clarification, really.”

The new school would also share the site with the Sikh National Museum and have extensive car parking space. 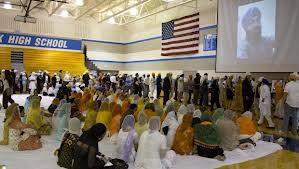