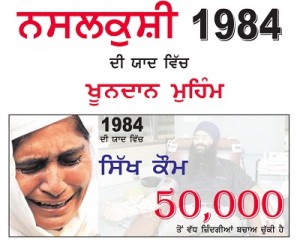 INDIA: Surrey – Members of the world-wide renowned and internationally acclaimed Sikh Nation, which began a revolutionary movement of remembering the over 30,000 Sikhs murdered in 1984 in India by donating blood in the month of November, gathered in Surrey this week to apprise the local media of this year’s drive that has collected drum loads of blood and saves the lives of over 67,000 people so far.

The campaign began in November 1999 when local volunteers such as Sunil Kumar, developer Charanjit Singh Matharu, Dr. Barjinder Singh and hundreds of like-minded individuals decided that the best way to commemorate the memory of the victims of 1984 Sikh Genocide was to remember them by donating the most important thing that runs in every living being’s veins – BLOOD!

And thus Sikh Nation (Sikh Quom) was born with a simple message and revolutionary purpose to save lives by donating blood in the memory of those who lost their lives at the hands of unjust and oppressive regime. Their humble request to all justice and peace loving people of the world is to become a part of their humanitarian campaign, which aims to address human right violations.

While I have named three individuals above as volunteers but they would not be happy with their names being mentioned and would insist that I don’t use any names as Sikh Nation encompasses everyone and does not have a single face or leader to spoil its worthy purpose, which is that it belongs to everyone and everyone can do their part to make the world a better place. They say the powers with the Genocidal Mindset, like the India of 1984, must be challenged by positive contribution to humanity.

This is how Sikh Nation describes itself on its webiste – www.genocide1984.com: “The Sikh Nation recognizes the equality of all human beings; and it rejects the concepts of idolatry, ritualism, caste system and asceticism. The founder of the Sikh faith, Guru Nanak Dev challenged the centuries old status quo of the Brahmin dominated social structure. By raising his voice against the injustice, Guru Nanak helped release the common man from the clutches of the Brahmins. He brought the downtrodden out of their misery and showed them the path to enlightenment. Eventually, Guru Gobind Singh sounded the death knell of the caste and class system when he baptized his five beloved ones from the same bowl and then sipped Amrit from the same bowl himself. In a revolutionary manner he thus transformed the docile populace to a freedom-loving nation ‘The Sikh Nation’.”

While many western media dismiss such initiatives as Blood Donation Drive, vigils to remember what the community has now termed “Genocide”, to remember the thousands of innocent Sikhs killed in Delhi and India in 1984 – it is the overwhelming propaganda by western media friends of the Indian government to malign all Sikhs by lumping them in with Air India tragedy and Sikh militancy, something they wouldn’t dare do to the Jewish community which has suffered a genocide at the hands of Nazi Germany. The genocide of Jews led to the birth of the Jewish state of Israel, which has been accused of human rights violation and killing women and children in bombings in Gaza. But no one lumps the Jewish tragedy with the Israel government’s violations. But Sikhs don’t have the same international stature as Jews. But as long as India fails to address the injustice and human rights violations that occurred in 1984 in Delhi against Sikhs and then against Muslims, Christians and other minorities in India – it will continue to face the wrath of victims like Baby Bai, who experiences the hate and violent crime first hand. Read her comments below:

“There were six members in our family. The three men, my husband and my two brothers-in-law, were murdered. Now only three women are left. My husband was first beaten and then burnt to death. I was sitting and crying when a big group of men came and dragged me away. They took me to the nearby huts in front of block 32, and raped me. They tore off all my clothes. They bit and scratched me. They took me at 10 p.m. and released me at about 3 a.m. When I came back, I was absolutely naked, just as one is when one comes out of the mother’s womb.” – Baby Bai, Trilokpuri