Sikh heritage items set to go under the hammer in London

NEW DELHI: Another auction of items relating to India’s heritage, including crockery belonging to Sikh kings, is set for September 27 in London, even as the government delays a national policy on acquisition of such items.

Among the scores of paintings, artefacts and documents relating to Indian heritage to be offered for bidding by auctioneer Mullock’s, will be the dinner plate of Sikh kings last used by Maharaja Duleep Singh, and a rare painting from 1828 depicting the death of the great warrior Tipu Sultan.

Even in the last effort to save such items – made on July 8, 2012 to acquire the Gandhi-Kallenbach papers – the union culture ministry had to give in to harsh bargain of Rs 6 crore after intense negotiations with the Tel Aviv-based owners. All this, after teams had been set up to evaluate the items and officials even travelled from New Delhi to London to Tel Aviv for the deal.

In that case, the ministry reportedly took notice after Giriraj Kishore, a 75-yearold Gandhian, convinced the government of the priceless value of the memorabilia related to Mahatma Gandhi, for which London auction house Sotheby’s had invited bids for a July 10 auction. Kishore credits the intervention of Congress president Sonia Gandhi which led to a pre-emptive buying out of the priceless items from the Kallenbach family two days before the auction.

“When the July 10 auction was announced by Sotheby’s, I sent two emails, one to the PMO and another to the President’s secretariat. A third letter was sent to Sonia Gandhi requesting her to intervene. I have reason to believe that my letter to Sonia-ji made a dent,” Kishore told HT.

The Congress president had also written to the Gandhian that the culture ministry is in the process of formulating a policy on issues relating to such auctions.

Kishore had also unsuccessfully requested the PMO on April 5 to stop the earlier auction of grass that carried traces of Gandhi’s blood that was auctioned in London on April 7. 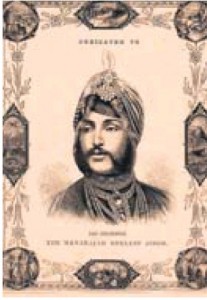 Tagged with: Sikh heritage items set to go under the hammer in London

Previous: The son of a Sikh killed in Wisconsin shooting for anti-Sikh hate crimes
Next: Give my mother at least the dignity of being a statistic