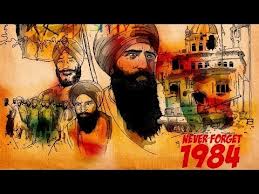 New Delhi: A Sikh group today criticised the Centre for “failing” to punish those involved in the 1984 Sikh Genocide and demanded immediate judicial action against the perpetrators of the violence.

The All India Sikh Conference also said it would not condemn the attack on Lt General (Retd) K S Brar early this month in London.

Brar had led the ‘Operation Blue Star’ in 1984 to flush out pro-Khalistani militants from the Golden Temple.

“We do not condemn the attack on Lt Gen Brar,” AISC President Gurcharan Singh Babbar said.

Demanding justice to the victims of the 1984 Sikh Genocide, he said the community have not forgotten the injustice and pain meted out to it 27 years ago.

Babbar said human rights group, ‘Sikhs for Justice’, will be holding a demonstration at the UK parliament in London on October 31 to highlight the injustice done on the community during the riots.

The AISC will also meet President Pranab Mukherjee on November 2 with a charter of demands and hand over a list of officials allegedly involved in the crime.

The group has gathered information on the riots regarding the disposal of dead bodies and issuing of death certificates through a series of RTIs, and demands a judicial probe into the excesses.