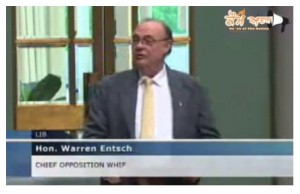 Canberra,Australia: According to reports available with  Australian MP Hon. Warren Entsch has tabled a petition of more than 4,000 signatures, calling for the government to recognise the killing of more than 37,000 Sikhs in India in 1984 as a genocide.

As per information 300 Australian Sikhs sat in the parliament’s public gallery to see the motion be put forward on the 28th anniversary of the events.

It calls for the violence, rape and killings to be recognised formally and urges the Indian government to bring those responsible for organising the campaign of violence to justice.

Mr Entsch compared the events in Delhi to the persecution of the Jews by the Nazis saying: “the continued denial of such historical injustices can only encourage modern-day crimes against humanity”.

He paid tribute to the growing and affluent Sikh community who have been a “vibrant part of the Australian cultural mosaic since 1897”.

He said he felt it was the right thing to do after being told about Sikh culture, tradition and religion by his friend Daljit Singh, adding: “That is why I commenced this journey two years ago and I hope our aims will be taken in that context”.

S. Daljit Singh who had approached said: “For Warren Entsch to take this issue to parliament is not only unforgettable for the Sikhs in Australia, but for the whole Sikh nation around the world. To speak against cruelty and genocide is a service to mankind”