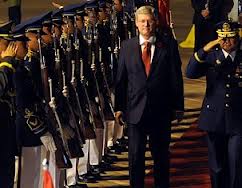 London,England: The Sikh Federation (UK) has congratulated Stephen Harper, the Canadian Prime Minister, for taking a strong stand against India and defending the right of Sikhs to campaign for a Sikh homeland.

The Federation has exclusively disclosed to Ajit details of what almost certainly led Stephen Harper to come out in support of Sikhs right to campaign for a Sikh homeland when pushed in Bangalore on the last day of his 6-day visit to India.

Congress leaders – Dr Manmohan Singh and Preneet Kaur, must now be regretting they ever raised in public the issue of curbing Sikh separatists living in Canada with Stephen Harper during his visit that ended yesterday.

Initially Preneet Kaur, Minister of State of External Affairs, in a meeting with Stephen Harper, said the “revival of anti-India rhetoric” in Canada was of “great concern” and linked this to possible unrest in Punjab. Stephen Harper then met Manmohan Singh on Tuesday 6 November where similar concerns were expressed.

In September India raised the issue with Canadian Foreign Affairs Minister John Baird during his visit to India. Baird had to clarify his position on return to Canada and issue a public apology to the Sikh community.

Harper first responded to Preneet Kaur by saying that Canada is a supporter of a united India and this view was widely shared among our Indo-Canadian community.

But the Indian government’s pressure on the issue was very poorly received in Canada and elsewhere by Sikhs. Stephen Harper therefore did not want a repeat of what happen to Baird in September.

‘We have been liaising and advising leading Sikh organisations in Canada prior to the visit and during the last seven days. This pressure from several quarters has had an impact.’

‘As soon as the first media reports started to appear of Indian government pressure we responded with direct contact from the UK with Conservative Sikh MPs – Tim Uppal, Parm Gill, Nina Grewal and Bal Gosal who were with the Canadian Prime Minister in India.’

‘We also contacted over 40 MPs from the federal opposition in Canada to get them to exert pressure on the Canadian Prime Minister and who have been supportive of Sikhs in relation to the November 1984 genocide of Sikhs.’

‘The combination of these two things, especially the personal contacts we have developed with some of the Conservative Sikh MPs over several years, even before some were elected have resulted in Stephen Harper coming out in strong defence of Sikhs having the right to peacefully promote the creation of a Sikh homeland.’

Stephen Harper is now on record as having said:

“Violence and terrorism can’t be confused with the right of Canadians to hold and promote their political views”.

His government “does not consider it a crime to argue or promote a Sikh homeland and believes other political parties in Canada agree with him” and declared that “he won’t be moved on this matter.”

A Federation spokesman said: “Hopefully, the Indian authorities will now think twice raising such matters on curbing the activities of Sikhs campaigning for a Sikh homeland with true democracies like Canada and the UK who will defend the right to freedom of speech, expression and political lobbying.”

Previous: Amritsar society to open weekend schools for NRIs
Next: Beyond the pain of anti-Sikh genocide