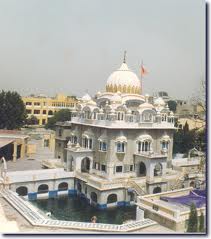 Comments Off on Sikh family looted near Nankana Sahib 221 Views

Lahore,Pak: Police have arrested a group of dacoits who robbed a Sikh family of thousands of rupees in cash, mobile phones and other valuables.

DPO Nankana Sahib Gulam Mubashir told a press conference that the Sikh family was looted while they were on their way home back to Lahore in a taxi after attending ceremonies in connection with the birth of Baba Guru Nanak in Nankana Sahib.

He said that the taxi in which Sardar Hardiyal Singh and his family were traveling in was intercepted by armed riders near Pipalwala bypass. The robbers looted the family and fled the scene.

The police officer told media that police registered a case and arrested the taxi driver who later confessed to his complicity in the robbery. He said that the police arrested three other robbers who were identified as Zulfiqar alias Zulfi, Munir alias Muniro and Attaullah and recovered money and others valuables from their custody.

He said that the recovered money and other stuff had been returned to the Sikh family.

Nankana Sahib:  Indian Sikh Yatrees left for Gurdwara Panja Sahib, Hassanabdal, by special trains amid tight security from here on Thursday. Talking to journalists before leaving for Hassanabdal, Indian Sikh yatrees group leader Dr Jang Bahadur Singh said that they were taking the message of love, peace and friendship with them. He said that they would never forget the warm reception given to them by Pakistanis.

Earlier, the birth anniversary festivities of Baba Guru Nanak Dev Jee concluded with the ritual of Bhog at Gurdwara Janamasthan on Wednesday night. Meanwhile, more than 4,000 Sikh and Hindu Yatrees contracted different diseases, including flu and fever, during their four-day stay at Gurdwara Janamasthan. The doctors said that Yatrees contracted diseases due to a change of climate.

Previous: Gurdwara body, BJP trade charges in political twist to Ponty case
Next: My turban: Made in the USA