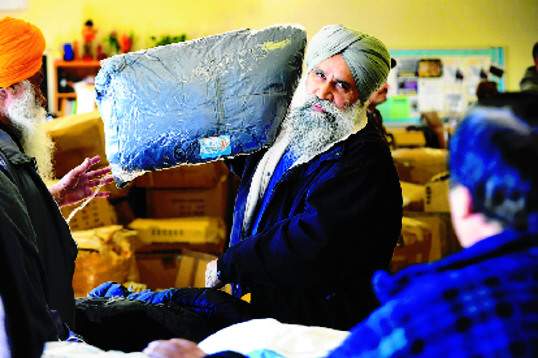 Comments Off on Sikh Family from Tracy Donates thousands of warm blankets, jackets to Community 546 Views

Organizers estimated that 2,000 to 3,000 men, women and children picked out new coats, gloves, socks and blankets at the Larch Clover Community Center on West Larch Road. Now in its 14th year, the event is organized by Tracy Sikhs and spearheaded by Mike Sandhu, co-owner of Sandhu Brothers Farms.

Sandhu said he helped organize a similar event in Modesto on Wednesday and will hold another from 4 to 6 p.m. Friday at the Stockton Shelter for the Homeless at 411 S. Harrison St.

The clothing giveaways are a way of honoring the sons of Guru Gobind Singh, Sikh martyrs who were confined in freezing conditions and beheaded by Muslims in Punjab, India, in 1705 because they refused to convert to Islam, Sandhu said.

Sandhu said he raised $150,000 for this year’s clothing drive, enough to purchase 5,500 new jackets and other items. Most of the money was donated by Sandhu Brother’s Farms, a 15,000 acre farming operation which produces almonds and walnuts in Tracy, Westley, Patterson and Gustine for distribution around the world. G&L Irrigation and Farming Supply and R&T Farms also made donations.

“You see people leave with tears in their eyes,” he said. “When you see the kids smile because they’re so happy to pick out clothes, there’s nothing in the world better than that.”

Dozens of volunteers hauled boxes of new clothes into the community center throughout the day. Others helped distribute clothing inside.

“Every year we’ve grown so much, but we still keep seeing the same people, and they’re still wearing the jackets they got last year,” said Chinny Takhar, a 28-year-old Tracy woman who volunteers each year. “It’s getting harder and harder for people, and being able to help them is amazing. Sometimes they hug us. It’s an awesome feeling.”

Volunteers said they found joy in helping people like Maribel Macias, a Tracy woman who picked out clothing for her toddler.

“This is a good thing,” Macias said. “It helps a lot to be able to get some warm clothes.”

The generosity of Sandhu and other donors moved Balentin Mejia, a Tracy resident who was accompanied by his wife and their two children, ages 5 and 2.

“This is perfect,” he said. “These are very good people. Sometimes families don’t have enough to buy presents for Christmas, and this helps so much.”

SikhWire comment: Sons of Guru Gobind Singh Ji were bricked alive but not beheaded by Muslims.