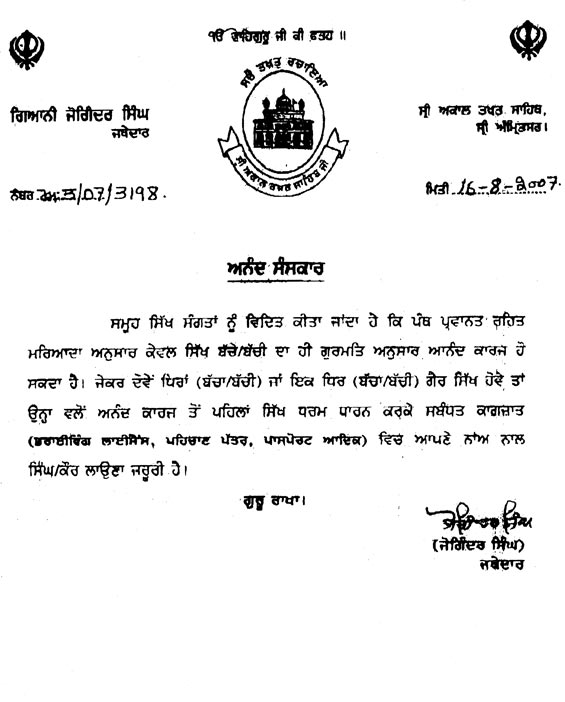 Sikh Code of Conduct and interfaith marriage issue in Swindon, UK – What is the reality?

In relation to Anand Karaj incident in Swindon 30th July, it is very disturbing how disgruntled members of the community are using this platform to grossly exaggerate events and tarnish the Sikh image in the media.

Facts and Time line of Events:

Raghdir Bains: A radical who is disgruntled and has been sidelined by the community for his continuous defiance of allowing Meat and alcohol in Guruwara owned properties. This person has a track record of opposing orthodox Sikh teachings. He has previously resorted to violence and intimidation with elderly members of the community.

Dr Harbans Popli; Was not present on the day, has made a statement because of his close personal ties with the family and has only 2nd hand information via the family.

“This is Wiltshire” Article: Grossly exaggerated and hugely offensive article based on one families interpretation of what took place. The family was not present at the Gurdwara, nor was the groom to have any first hand information. No interview with the management committee of the Gurdwara, why not?

We can only conclude this is amateur reporter, Josh Layton does not have the experience and unable to report both sides of a story.

The Sun Article: based entirely on Josh Layton’s article, with even more exaggerated claims:

“This is Wiltshire” Article: “We had a caterer in charge of the breakfast. They ate all the food and then told him ‘go or we’ll kill you’ – Referring to the Caterer

The Sun Article: “They ate all the food and then told him (the groom) ’go or we’ll kill you’. – The Groom was not even present

Sikh leaders have confirmed they are in dialogue with the police and no threats or intimidation have been report. The police confirm it was a private function, on private property, cancelled by the management.

The Anand Karaj ceremony is a Sikh specific ceremony and interfaith marriages via Anand Karaj is against the Sikh code of conduct.

This does not mean Sikh’s object to inter faith marriages or choices people make in the personal lives, via any other means. Court Marriages etc.

The Sikh Code of Conduct is quite clear, and vast majority of Gurdwaras abide by it.

Q: What are Sikh beliefs on Inter-Faith marriage?

A: Sikh Gurus showed a lifestyle which one can follow to meet God. It is better to get married to someone with whom you share similar beliefs than to marry out of religion. Sikhism does not state that marrying out of religion is wrong or a sin. However, the marriage has a far better chance of success if the couple belongs to the same religion. Since beliefs can differ and can cause conflicts, it is better to be with someone with the same belief system.

The more a married couple has in common, the more likely their marriage will be successful. When a couple disagrees on basic core values and beliefs, it can lead to additional stress, conflicts, and disappointment. The issue of how kids are raised can be especially problematic. The decision regarding which teaching and beliefs should the children be taught can become difficult to deal with.

Sikhism is a modern religion, and instructs that all humans are created equal. In no way Sikhism states that one should not marry another human because they are less of human or inferior. All humans are equal but people from different religions have different beliefs. The difference in beliefs system and lifestyle is the main reason to marry within the religion.

A Sikh can get married out of the religion if they choose to, however they cannot do so in the Gurdwara Sahib since Anand Karaj (Sikh Marriage Ceremony) is very spiritual, religious and a promise with God.

In order to live a peaceful lifestyle to accomplish the purpose of the human life, one should get married to a Sikh so that the couple can together carry on their journey on the path showed by Sikh Gurus.