Sikh cadets a reflection of history

Canada: Having a cadet group called the Surrey Sikhs would fit into a history of loyal military service.

Sikhs have had a long, proud military tradition and using the word ‘Sikh’ to identify a regiment within the Canadian military would prove to be an asset for the forces.

Doing some research on the topic, it becomes very obvious that the Sikh military has existed for centuries and has stood proud in many wars including the Battle of Sargarhi.

The Sikh military tradition dates back to the founders of their religion with the sixth Sikh Guru, Guru Hargobind (1595 to 1644) when Sikhs fought their first battles against Mughal oppression.

Sikh regiments have served in the British army in battlefields around the world including Sudan, fighting slave traders in central Africa, in Persia and in the Middle East.

More than 65,000 Sikh soldiers fought in the First World War as part of the British Army and more than 300,000 Sikhs fought German and Japanese tyranny in Second World War.

The Gurkhas who reside from the Nepal region of India have been part of the Indian contingent of the British Army for more than two centuries and have proven that defending a multicultural nation can come from a particular ethnic regiment of soldiers.

The Canadian Forces have also proven this with at least 15 regiments that reflect ethnic diversity. For example: Seaforth Highlanders, Canadian Scottish Regiment and Sudbury’s Irish Regiment of Canada, just to name a few.

Building an inclusive, diverse community can be very complex. By allowing cadets from a particular religious faith to form their own unit to perhaps one day serve and protect our nation would definitely be a Canadian thing to do.

I see nothing wrong with their name being called Surrey Sikhs or with this group to exist for that fact.

Looking at some of the past history of the Sikh military, Canada would be a fortunate country to have such a fighting force on its side.

As one letter writer put it: “These people are willing to put their religion on the line for Canada. Particularly when you consider that they would rather wear a turban instead of a steel helmet on the battlefield.”

At times unfortunately I believe the Sikh community in Canada struggles with a perceived image problem.

With encouraging Sikh youth to join the cadets and be passionate about their commitment towards Canada, we will hopefully see positive changes on how this sect is viewed.

Where I identify a larger issue in all of this is when one of the organizers spearheading this discussion commented that “without Sikh in the name the cadet corps wouldn’t have drawn as much interest.”

This points us to a greater issue within the South Asian community.

Our diverse communities need to become more involved in activities that pertain not only to their own culture or religion. To support initiatives such as this should not limit us to reach out to mainstream causes.

In this case I honestly believe diversity can work in isolation and in partnership with the Canadian Forces for the betterment of our nation and in keeping with British tradition.

Let us not allow a name or religion to become a stumbling block for the greater good. 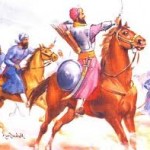