This comes close on the heels of September 30 attack in London by suspected Sikh separatists on Lt Gen (retd) KS Brar who was part of the Blue Star operation to flush out armed terrorists at the Golden Temple.

The SGPCSGPC hailed Gen Vaidya’s killers at a function in the Golden Temple. It offered religious prayers and honoured the kin of Jinda and Sukha of the Khalistan Commando Force (KCF). The event was organised at the Golden Temple complex in Amritsar to observe the death anniversaries of the two terrorists.

The SGPC presented ‘siropas’ (robe of honour) to Jinda’s brother Bhupinder Singh and Sukha’s kin Surjit Kaur after the prayers. The ceremony is held annually.

Jinda and Sukha shot dead Vaidya in Pune in 1986 to seek revenge for the Operation Blue Star, the army operation in June 1984 to flush out terrorists holed up in the Golden Temple complex, which is the holiest of Sikh shrines. The heavily-armed terrorists, led by separatist leader Jarnail Singh Bhindranwale, were holed up inside the shrine complex for months on.

Vaidya was the Army chief when the operation was carried out. He settled in Pune after retirement. He was accompanied by only one securityman when the attack took place.

Jinda and Sukha were later arrested and tried for the killing of Vaidya. They were sentenced to death and later hanged in on October 9, 1992.

Lt Gen Brar was attacked by young men near Oxford Street in London September 30. He fought back and survived the attack. Now he is back in Mumbai and many persons have been detained on suspicion by the police in London. 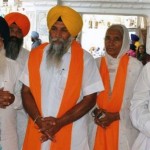