Shimla: Convent school controversy over ban on turban in school

Shimla: A controversy broke out here over alleged ban imposed by a convent school on wearing of turban by a Sikh student, with local Sikh organisation demanding that the administration take action against the school, which, however, denied the charge.

A student of local St Edward School complained to his parents that the Principal had asked him not to wear the turban and wear only a “patka” (small headgear) last month. 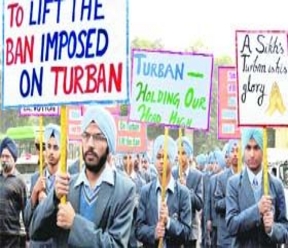 The local Guru Singh Sabha took up the issue with Deputy Commissioner and urged him to take action against the school. Deputy Commissioner Onkar Sharma said “the agitated members of the Sikh community have given a representation to me against the decision of the school and it is a serious issue that involves religious sentiments of Sikh community. “We will call the parents, the Sikh bodies and the school management and sort out the matter”.

However, the Principal of the school John Bosco, when contacted, said that he had never disallowed the boy to wear a turban and only asked him on the first day of this session that why he was not wearing a “patka” like other boys.

Gurdwara Sri Guru Singh Sabha President Jaswinder Singh said an unhealthy controversy had been raised in the school. “We denounce the school authorities for behaving rudely with the boy for wearing the turban and asking him to come out of the class, go back home and come with ‘patka’ on his head,” he said.