SC: Punjab must give flats to ’84 riot victims

New Delhi:The Supreme Court today observed that it was the responsibility of the nation and the government to provide flats to all those rendered homeless in the 1984 anti-Sikh riots.

A Bench comprising Justices Aftab Alam and Ranjana Desai made the remarks while hearing a petition challenging the July 10, 2012 order of the Punjab and Haryana High Court directing the Ludhiana Deputy Commissioner and the Police Commissioner to evict unauthorised occupants of flats meant for the riot victims and hand these over to deserving claimants.

Arguing for the petitioners, counsel Jaspal Singh and Satinder Singh Ghulati contended that the high court order was contradictory to a December 13, 2011 judgment of the same court on the issue. In the 2011 verdict relating to the Ludhiana Sikh Migrants Welfare Board, the high court had directed the authorities to first determine the genuine and bonafide victims to whom Red Cards had been issued.

Today, the SC asked the Punjab Government to take “positive steps” on the issue within 10 days and listed the petition, filed by Dharminder Singh and three others, for further hearing on September 28.

The petitioners had “mentioned” their case before the Bench, seeking an early hearing of their petition.

Appearing for Punjab, counsel Kuldeep Singh said the state government would take a decision in one week. At this, the Bench said, “We have taken a decision. You implement it in one week. It is not only your legal responsibility, but you are also morally and ethically responsible in every sense of the word not to evict the riot victims.”

It was a national responsibility to ensure that the victims were rehabilitated, the Bench pointed out. As the Punjab counsel pleaded for more time, the SC granted 10 days time and directed it to report back on the next date of hearing.

The petitioners said they were forced to leave their homes from different parts of the country. 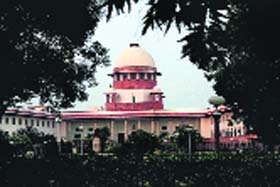