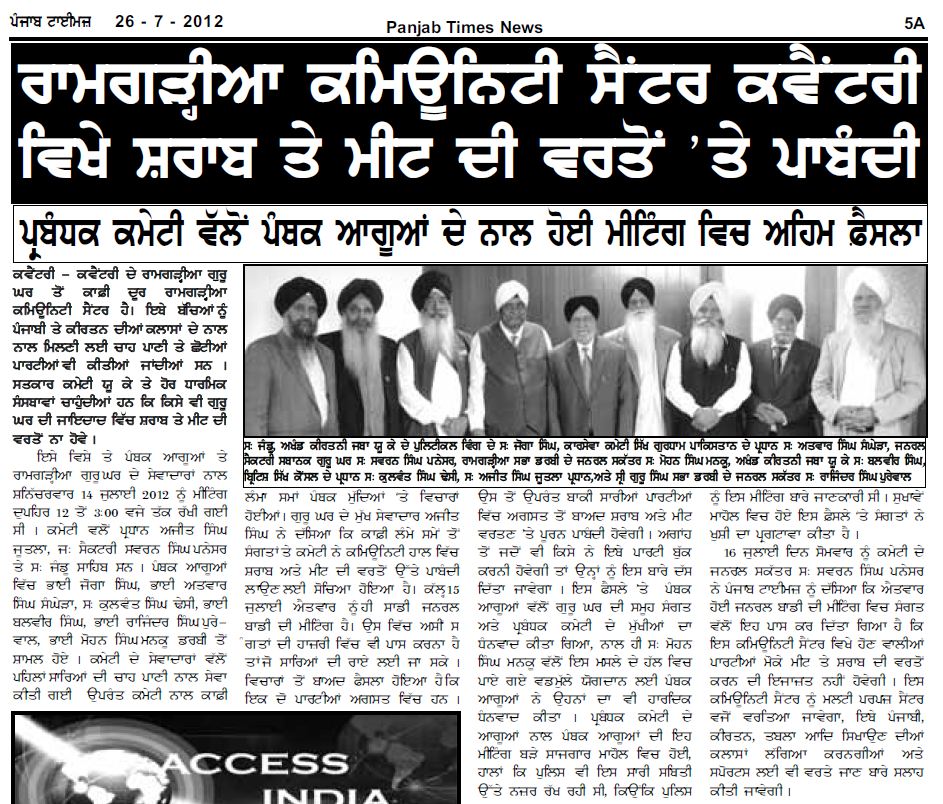 UK: We are pleased to inform the UK Sangat that with Guru Maharaaj’s kirpa the management committee of Ramgarhia Gurdwara Coventry have agreed to stop taking further bookings for meat and alcohol parties in the community centre which is owned by and is part of the complex of the Gurdwara.

The decision was taken at a general body meeting of the Gurdwara on Sunday 15 July 2012. This followed a meeting that took place between representatives of the Ramgarhia Gurdwara committee and various Gurdwara Parbandaks from the midlands region onSaturday 14 July 2012. The representatives from Ramgarhia Gurdwara included the President Ajit Singh Jootla, General Secretary Swaran Singh Panesar and committee member Surinder Singh Jandu.

The Ramgarhia Gurdwara Coventry committee representatives informed the Parbandaks that they had contemplated banning meat and alcohol parties for a considerable time but would now do so by way of submitting a motion at the general body meeting on 15 July 2012. The Gurdwara committee informed the Parbandaks that three more parties were scheduled to take place the last being on 18 August 2012 and that nofurther bookings with meat and alcohol would be taken after that date. It was confirmed that the Gurdwara sangat would be informed of this and that the community centre would in future be used as a multi-purpose centre including for Punjabi and Kirtan classes and that the possibility of using it for sport would also be looked into. The Ramgarhia Gurdwara Coventry committee representatives agreed for Satkaar Campaign Sevadaars to attend the Gurdwara at a future date and address the Gurdwara Sangat.

We congratulate the Ramgarhia Gurdwara Coventry committee for the welcome step it has taken and are thankful to the midlands Parbandaks for their active involvement on finding a resolution in this matter. We are appreciative of the fact the Parbandaks arranged their meeting with the Ramgarhia committee at shortnotice upon our request. We look up to the Parbandaks and wish to continue working hand-in-hand with them to ensure that all UK Gurdwaras follow the 2006 Sandesh prohibiting meat and alcohol parties so that the authority of Akaal TakhatSahib is not undermined and maximum Satkaar for Sri Guru Granth Ji Maharaaj is maintained. Satkaar Campaign Sevadaars remained committed to raising awareness on this issue and will work together with all Parbandaks and Jathebandees to remove the cancer of party halls on Gurdwara premises from Gurdwara’s throughout the country.

Finally, we would like to point out that we understand the three remaining parties at Ramgarhia Gurdwara Coventry community centre will permit meat and alcohol to be consumed. We invite the Gurdwara committee to liaise with the relevant families that have booked the parties to have them re-located to another venue not linked to the Gurdwara Sahib, so as to prevent the Beadbi that will otherwise occur.

2012-07-25
SSNews
Previous: She fought all her life for freedom, women and the deprived
Next: India’s acid violence against woman